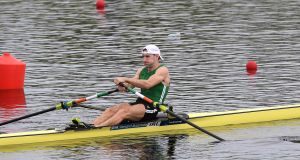 He was fastest to 500 metres in the A Final, and while Sean Murphy of Australia took over from there and won, O’Donovan stayed in the top three which moved clear of the rest. Rajko Hrvat of Slovenia, a specialist in this non-Olympic boat, took the silver medal.

“I think this race went well,” he said. “I still need to work on my fitness, and that showed in the last 750. But it’s a work in progress.

“I came here to prove to myself and to the selectors that I still deserve a chance, that I can fight for a spot in the double sculls.”

O’Donovan was one of four Ireland boats to qualify for A Finals, with a first, two seconds and third placing in the semi-finals.

The men’s double of Philip Doyle and Ronan Byrne won their semi. The Ireland crew were the top crew right through the race and led Germany and late chargers Australia into the A final.

Paul O’Donovan and Fintan McCarthy drew the in-form German lightweight double of Jonathan Rommelmann and Jason Osborne in their semi, and the favourites were the dominant crew. The new Ireland combination closed right up coming up to the line and were just 1.66 seconds behind as they crossed. Australia were much further back in third.

Aileen Crowley and Monika Dukarska, the Ireland women’s pair, also finished second and qualified. They took the race to the other crews through to 1500 metres. Romania passed them to win, but Ireland held second despite a charge by Spain, who took third.

Jake McCarthy competed in the lightweight single sculls, but could only take fourth and a B Final place. He went on to take sixth there.

The women’s lightweight double of Denise Walsh and Lydia Heaphy were sixth in their race and go the B Final.

The second day of the Irish Rowing Championships at the National Rowing Centre belonged to Holly Davis. The 14-year-old Lee Valley girl – she turns 15 in January – won the Junior single sculls, an under-18 grade. The win was no shock, as she had also won at Skibbereen Regatta.

While some juniors were absent because of international engagements, Davis is a bona fide prospect who has not been beaten in this boat this season.

Three other crews with young rowers won in the first finals session:

Kevin O’Donovan of Shandon won the club single, while Anna Tyther, who is also a junior, was part of the top intermediate double, Killorglin.

Double Sculls - Semi-Final Two (First Three to A Final; rest to B