Serena the anti-hero? Williams is respected, but love proves elusive 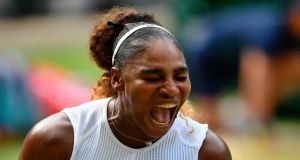 Serena Williams: ‘Things I do different now than when I first was on tour. It’s lengthening my career.’ Photograph: EPA

One of the many headlines in the English media after the USA won back-to-back World Cups last week referred to the team being more respected than loved. The cup of tea celebration by Alison Morgan after she scored against France seemed to have struck a sensitive chord. Fearlessly, Morgan defended herself as just another victim of double standards; men can do that, women cannot.

Serena Williams has often had to defend herself and strike out alone. Equal pay, an African American champion who has endured racism and in 2018 at the US Open she accused umpire Carlos Ramos of sexism. Williams is respected and as she ages and becomes more vulnerable, a mom too, the love is better than before.

But still she sits there with the American soccer team, held in esteem, on the cusp of equalling a record 24 Grand Slam wins, dignified, honoured, venerated and recognised as one of the greatest athletes of any generation but warmth from fans is missing. There was more affection for teenager Coco Gauff.

“Man, they’re like amazing. It’s so good to see,” she said about the soccer team. “They have a whole nation cheering them on. No matter where you are, you’re . . . really inspired by the team all together.”

This year of all years has been a stagger up to the summit. The injury that has held her to just 12 matches since January and barely allowed her be at the All England Club has made these two weeks more charged with suspicion that she would falter.

The first week she didn’t move her legs, was sluggish on court, could not generate the trademark power that comes from hitting through the ball and her serve was an arms only delivery.

Still, she survived. She is the only player on tour who could with those physical limitations. Then as the fear of the debilitating pain in her knees returning dissipated, she has begun to move more freely. She is coming to the net and while the serve still goes missing under pressure she leads the ace count.

“I think technology has really changed. That’s the only reason I’m able to compete,” she said after beating Barbora Strycove in the semi-final. “I feel like if we had this technology 20 years ago, maybe Michael Jordan would still be playing basketball. I just feel like we know so much more about our bodies.

“Things I do different now than when I first was on tour. It’s lengthening my career . . . That’s one thing that keeps me moving forward.”

She has been on this cusp for two years now during a period in which she has embraced a pregnancy, a life-threatening birth, maternity leave and this year her creaking knees.

But people are drawn to vulnerability and weakness and Williams has never allowed those into her public life. The act of being so great, the struggle to play for 20 years and dominate, the creation of her dynasty as a black woman in a white sport and what particular type of strength it takes to do that threatens and alienates.

It draws out jealousies from others and sets you apart until it seems it is you against the world. Williams has always used that as a motivation. Her lack of self-doubt, her often lukewarm praise for opponents who beat her is the flip side of greatness, what it is that gets her in a position to beat Simona Halep, to equal Margaret Court’s 24.

If she does she will perform a choreographed twirl and wave and Centre Court will understand the enormity of her achievement and love her for being fabulous, but maybe not quite pull her to their bosom.