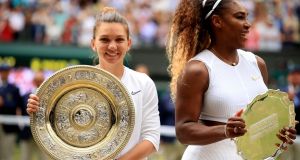 Halep, a former world number one and French Open champion, earned her first Wimbledon title on 6-2, 6-2 in a one sided match that lasted 55 minutes.

A strong favourite, Williams remains on 23 Grand Slam wins and still one short of the 24-win record of Australian Margaret Court.

Unusually, it was the American player who struggled to live on the court she has called her own over 20 years with the battling 27-year-old from Constanta, never once blinking even when Williams raised the volume and power of her game.

“Never,” said Halep when asked if she had ever played a better match. “It was the best match. I have worked a lot for this moment.”

Williams only intermittently reached her high level with 25 unforced errors costing her dearly. Although her form looked as though it had returned in her semi-final win over Barbora Strycova, she had played only 12 matches this year and just twice against players ranked in the world top 10.

“She played absolutely out of her mind,” said Williams afterwards. “I gotta keep trying.”

Halep broke the famed Williams serve in the first game and from there sped to a second break for 3-0 and served to take a 4-0 lead. Doing to Williams what the American has often done to opponents, she never once faltered with a solid all round game.

Her serve held up well and for the match won 82 per cent of the points on first serve to Williams 59 per cent. It was another aspect of the game that hurt Williams. Halep’s first set was put away 6-2 as Williams appeared to be grooving her game a little.

But Halep sprung again in the fifth game of set two, Williams missing an easy put away backhand at the net that went long on break point. Williams needed to threaten the Halep serve but was unable to find any consistency.

Instead the Romanian broke serve again, a backhand up the line leaving Williams stranded on the other side of the court and 5-2 down. There were no nerves in the final stanza as Halep served for the championship, a forehand into the net from the American handing her opponent her second Grand Slam title and first in London.

“I’m shocked. She obviously is a tremendous and, at this stage in her career, the superior athlete,” said John McEnroe.

“But I didn’t think it would intimidate Serena Williams as much as it did today. Serena seemed somewhat shocked, and I didn’t think that would be the case with the experience she has. Halep completely and thoroughly outplayed her. It wasn’t even a match.”