In the absence of qualification regatta, final two places could be allocated on basis of World Championships result 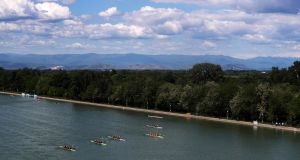 Two more boats are set to be added in the women’s four: China and Ireland finished ninth and 10th in the 2019 World Championships in Linz-Ottensheim. a competition where eight boats qualified. Photograph: Getty Images

Through the storm of controversy about the date for the Olympic Games, a flicker of light is visible for Irish rowers. Should the Games go ahead in July – and perhaps even if they are deferred a few months – Ireland look set to have a bigger rowing team at the event.

The Ireland women’s four have been bent on joining the four boats which booked their places in Tokyo. They have gone through a selection process and would have been a good bet at the Olympic Qualification regatta. Now that that is cancelled, their claim remains very solid.

In the absence of new qualification events, it seems likely, and fair, that qualification will be based on placings in the 2019 World Championships in Linz-Ottensheim.

Two more boats are set to be added in the women’s four: China and Ireland finished ninth and 10th in a competition where eight boats went through. Both crews felt hard-done-by because, in windy conditions, the lane draw was altered after the race to favour their lanes. But even if that were not the case, they are the next in line if the IOC choose to base qualification on the results of the most relevant event.

The Ireland lightweight women’s double could also qualify on this basis. Here, the plan has been to have 18 boats in Tokyo, and Ireland finished 17th in Linz-Ottensheim. This route is less certain, however, as qualifiers from Asia/Oceania, Africa and the Americas were to fill seven of those 18 spots.

The open weight rowers based at the National Rowing Centre continue to train with their eyes on the prize. The lightweights who returned from camp in Spain last week have, as requested, stayed away from the NRC and restricted their movements, but they have continued to train.

Rowing Ireland has postponed all activities through to the end of April – including its agm – and set up a high-powered work group to consider the best way forward. Most clubs are closed and very few rowers expect much to happen in May.

It is quite possible that the Irish Championships will be fixed for the autumn, with everything falling into place around that. However, a decision on the format of the season will not be taken until some certainty emerges on the point at which it is safe to resume mass gatherings. There will then be consultation with clubs.

The presence of the Olympic squad at the National Rowing Centre, the optimum location for the championships, might be a complication.

But if the elite rowers have to stay on until autumn because of a delayed Olympic Games, the prospect of domestic rowers competing in that period are probably also slim.