While all organised sport is cancelled, there are still ways to stay active and get outdoors 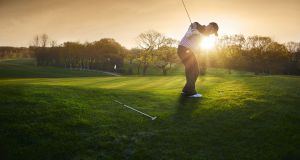 The latest advice from the GUI is that golf is a low-risk environment. Photograph: iStock

By all accounts, if the global pandemic of coronavirus which has the country in its grip at the moment is to be beaten, the main things that can be done are to socially distance as much as possible, wash hands and disinfect at home. However, with this partial ‘lockdown’ now well and truly on us and with plenty of homes now full to capacity with people working from home and children off school, cabin fever can start to set in quickly.

But it doesn’t have to. Being out in the fresh air, as long as you aren’t with lots of other people, is widely thought to be one of the lowest risk environments so here are five things you can do if you’re looking to get out of the house. Just make sure to wash your hands and/or shower as soon as you get home after doing any of these!

Play a round of golf

As of now all golf clubs remain open and the latest statement from the Golfing Union of Ireland (GUI) last week reassured people that a round of golf is a very low-risk pursuit in the current times, especially as you will only be with three other people at most.

While social golf, such as shotgun starts, which bring a lot of people together at the one time have been advised against and some clubs have decided themselves to cancel all competition golf, the advice is that casual golf at the very least is fine to continue.

Advice from golf clubs is to exercise caution and that can be done in simple ways such as leaving the flag in at all times to prevent repeat touching, smoothing over bunkers with your feet rather than picking up the rake and not using the air hoses to clean shoes and trolley after you’re finished.

Go for a run

There are few better and healthier ways to clear the head and escape the captivity of your house than going for a run. Large running groups may be best avoided but going for a run is generally very much a solo pursuit anyway. If you have time on your hands with work closed it could be the perfect time to try out some new routes. While the Dublin Marathon in October (all going well it will proceed as planned) has reached full capacity, this might be the time to start thinking about doing it next year.

Most gyms around the country have closed to avoid the spread of the virus on their premises and that means that a lot of swimming pools are now off limits.

However, if your gym and pool are still open it’s reassuring to know that the pool itself is very safe from the spread of disease as long as the chlorine levels are above 15mg.min/litre, according to the World Health Organisation.

However, one thing that definitely won’t close down during this time is the sea. At this time of the year the water is particularly freezing but a quick dip will rejuvenate the senses after all of that time stuck inside.

A kickabout in the park

While organised five-a-side has been put on the back burner, there are still plenty of places to go with a few mates and a football. The idea of a group of people sweating and crashing into each other for an hour may not seem like the best way of socially distancing, but speaking on Friday’s Late Late Show, Professor Sam McConkey, who specialises in infectious diseases at Beaumont Hospital, encouraged people to get together for some fresh air and exercise, and said “the outdoors is a very safe place” and “for 10 guys outside kicking a ball, that’s fine.”