Russian in imposing form as she thrashes Sweden’s Rebecca Peterson 6-2, 6-1 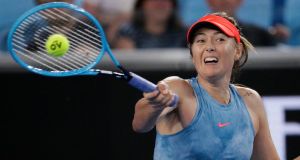 Maria Sharapova makes a forehand return to Sweden’s Rebecca Peterson during their second round match at the Australian Open in Melbourne, Australia. Photograph: Aaron Favila/AP

Former Australian Open winner Maria Sharapova continued her marauding form by handing out a 6-2 6-1 thrashing to Sweden’s Rebecca Peterson  to set up a blockbuster third-round showdown with holder Caroline Wozniacki.

In a clash of former world number one players, the five-times Grand Slam winner will next meet Dane Wozniacki, who eased past Johanna Larsson 6-1 6-3 earlier in the day.

“It’s always a physical match,” said Sharapova of her third-seeded opponent looming in the next round, with Wozniakci having won her first Grand Slam here last year.

“She gets a lot of balls back. A great retriever of the game. Just incredibly solid. Does a lot of things well. You kind of have to, to be number one in the world, to be a Grand Slam champion. I expect her to do all those things on Friday.

“I think the Grand Slam was the one trophy she was looking for. With determination she got there last year. She loves playing here, loves everything about this tournament. I certainly have a tough match ahead of me.”

The Russian 30th seed, who was suspended for 15 months for taking banned drug meldonium in 2016, broke 23-year-old Peterson twice in the opening set and peppered the court with powerful groundstrokes in a superb display of hitting.

Sharapova, who also thrashed Britain’s Harriet Dart 6-0 6-0 in her opening round match, won seven consecutive games against the Swede to take a 4-0 lead in the second set before world number 64 Peterson could get on the board in the set.

With the previous match between local hope Alex de Minaur and qualifier Henri Laaksonen lasting five sets at the Margaret Court Arena, Sharapova’s match ended long after midnight and the Russian was in a hurry to finish as it was way past her bedtime.

“It was definitely a different type of match. Took a lot of warming up for this one. Bit of uncertainty going into a match quite late. But, yeah, despite all those changes, I thought I played well.”

The 31-year-old Sharapova, who last won a Grand Slam at the 2014 French Open, only struggled against the Swede briefly in the second set during a lengthy hold of serve to go up 5-1.

But such was her dominance that the Russian, who won in Melbourne in 2008, did not face a break point in the match and sealed the contest in 71 minutes with a third break in the second set.

“I think there’s certainly things I want to improve. I’ve been happy with the way I focused throughout the match, kept my concentration,” she added.

“It’s not easy to start one match at 11 am, then 48 hours later, a little bit more, to start one that’s just before midnight. Just all those things, they’re about adjustments. I have that experience.

“So I’m happy that I’m able to come out into a match like this and say, ‘I’ve done this before, I know the drill, I know how this goes, I’m ready, and I need to step it up. No matter what my opponent brings today, I have to get it done’.”

There will be an exciting clash in round three between highly-fancied Aryna Sabalenka and 17-year-old American Amanda Anisimova, who reached the third round of a slam for the first time with a 6-0 6-2 victory over 24th seed Lesia Tsurenko.

3 Arsenal cruise past Newcastle with minimum of fuss