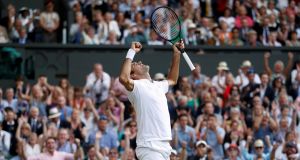 Roger Federer came off court and proclaimed “I’m very, very excited.” He appeared the least enervated person on Centre Court after perhaps his best performance since he last won a Grand Slam in Australia 18 months ago. His last win at Wimbledon was 2017.

Incredible accuracy and consistency, especially off his backhand side means Federer, four weeks from his 38th birthday, will meet Novak Djokovic in the final, the father of four trying for his 21st Grand Slam title and ninth at Wimbledon, Djokovic his 16th and fifth in London.

The hugely anticipated meeting with Nadal had been whipped up into a sequel of their epic 2008 meeting, when Nadal beat him in a four hour plus chronicle of unmatched quality. Once again the Spaniard brought out the best but Federer, this time, matched him and turned the screw.

Federer’s serving was sure, not because of his 14 aces to 10 from Nadal but the consistency and the unflappable way of delivery when he needed it most.

Federer played mostly to Nadal’s back hand and even in the longer rallies of the match, one of 23 shots, one of 25 shots and the longest of 26 shots, it was Federer invariably coming away with the point. It must have been a huge frustration for the Spaniard, the best tennis has ever seen on clay and long rallies.

Both players creaked on their service games but so too was it a match of quality, easily the high point of this year’s competition. Both players were also high in the 20s for unforced errors with Nadal’s serve challenged eight times by Federer and the Swiss just a point away from losing his 10 times.

Still, the match was played on the edge for the entire three hours and two minutes, a tiebreak giving Federer the early edge before Nadal fired back with 6-1 in the second as the crowd went into a fearful bout of despairing groans.

Vital that he rebound immediately, Federer did just that by racing to 3-1 in the third set, a stunning 23 shot rally spurring him to hold serve for 4-1 and take the set. It took five match points for the match to fall his way on their 14th Grand Slam meeting and 40th meeting at Tour-level, Nadal hitting a return over the baseline and Federer’s arms shooting into the air as if it was a championship win.

“I think at the end of the match I started to play much better, no?” said Nadal. “But was (too) late. I think today the backhand didn’t work as good as in the previous rounds. I was little bit too worried about my backhand, so I was not able to move with freedom to the forehand.

“I was a little bit too worried about not missing with the backhand. When that happens against player like him, is so difficult. As I said, I think he played aggressive, he played a great match, and just well done for him.

“He is always able to do the most difficult things easy. He’s able to move inside the court quicker than no (any) one,” he added of the second oldest player in the draw. That will be tested by Djokovic, who in the early match took four sets to overcome Spain’s Roberto Bautista Agut 6-2, 4-6, 6-3, 6-2. Djokovic appeared to have control from the beginning, dropped a level in the second set and lost it 6-2 before picking off where he had started.

Along the way in the third set the pair hit a record 45-shot rally, which Djokovic won. But in the back of the Serb’s mind was that he had lost to Bautista Agut twice this year in Doha and Miami. The mid-match slump clearly agitated the top seed, who is now chasing his fifth Wimbledon title.

In a second set in which Djokovic changed his racquet on numerous occasions he fell to an early break from which he didn’t recover. His frustration carried into the third set but when the demons left him he resumed his controlling position, a double break of the Spaniard’s serve in the fourth set enough to propel him into the final.

“Look, my main motivation is really to be out on the court and enjoy what I do,” said the 32-year-old. “I know it’s a cliché. But I think this is essential. Without that, magic cannot happen, good results cannot happen.

“I don’t see this as my job or as my work. I’ve done enough in my career so I can stop tennis, professional tennis, at any time. But I don’t do it for those reasons.”

Djokovic defeated Federder in the 2015 final. But this year Roger seems intent on cleaning house.