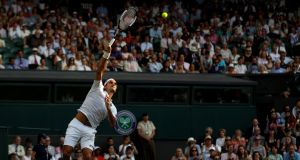 No one does a first-week demolition better than Roger Federer. The defending champion is into the fourth round again without dropping a set and just one month shy of his 37th birthday, seemingly finding things as easy as he ever did.

His 6-3, 7-5, 6-2 victory over Jan-Lennard Struff, the world No 64, was so straightforward he was able to show off his whole box of tricks, testing out a few things that might come in handy in the second week.

“It’s a wonderful feeling walking out there,” said Federer, who will now play France’s Adrian Mannarino in a section of the draw in which Marin Cilic, the man he beat in last year’s final, and in the Australian Open final this year, has already vacated.

“I take every match one at a time, I try to put on a good match, try hard every time, and will never underestimate anybody – that keeps me in check.”

With his former coach Stefan Edberg, twice the winner here, in the crowd, the eight-time champion was enjoying himself so much he even pulled out the SABR (the Sneak Attack by Roger), returning the Struff serve on the half-volley almost on the service line. It is a tactic he uses sparingly, a sign of how much fun he is having on court, even if he sometimes forgets he has it in his locker.

“Well, I can never practice it because how do you?” he said. “It’s not really what you do in a practice with other guys. They would be like, really? I can only really practice it with my coach. That’s why it disappeared a little bit. When I do it again, it’s quite exciting for me: ‘Oh, I can do that maybe again.’ I always have to check the score first.

“I’m happy I did it. I’m happy it worked. After that I feel like there is a buzz for me. OK, shall I do it again, no? What shall I do now this next time? I think it just helps me with keeping it exciting for me, as well, with options. I already always have the option of slicing or coming over. Then with the SABR, I think it makes it more fun for me.”

Struff had come back from two sets to love down in each of his previous two rounds and needed a good start against Federer in this kind of form. A backhand pass, rolled beautifully across the incoming Struff earned Federer the first break for 4-2 and he held the advantage to take the set.

One break, in the 11th game, was enough to give Federer the second set and two more breaks, in the third and seventh games, set him up to serve out for victory, which he completed with his 10th ace, a near-perfect serving performance, winning 37 out of the 40 points on his first serve.

“It’s good that I faced different types of opponents in this first week, was able to find a way to get through,” he said. “In the next round it will be a lefty. It will be much more of a strategic match.” – Guardian service