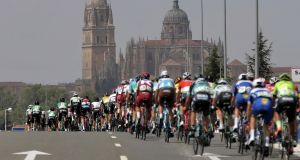 Riders in action during the 10th stage of La Vuelta 2018 cycling tour, over 177km between Salamanca and Fermoselle, Spain, on Tuesday. Manuel Bruque/EPA

Nicolas Roche (BMC Racing Team) is the sole Irish rider remaining in the Vuelta a España, with Dan Martin a non-starter on Tuesday’s 10th stage. Martin’s wife Jess was due to have twins next month but is far ahead of schedule, leading to Martin leaving the race to be there to assist her at the birth. It is unclear if this will affect his participation in the world championships later this month. It is being held on a course which should be perfect for a full-strength Martin, although he wasn’t at his best form in the Vuelta.

Roche placed 62nd on stage 10, which was won by Elia Viviani. He crossed the line in the same group as Viviani and remains 35th overall, 13 minutes 57 seconds behind the overall leader Simon Yates (Mitchelton-Scott).

Meanwhile, Matthew Teggart (Team Wiggins) continues to lead the sprints classification at the Ovo Energy Tour of Britain. Best of the Irish on Tuesday’s third stage was Mark Downey, who placed 33rd. He was six seconds behind sprint winner Julian Alaphilippe (QuickStep Floors), the winner of the Tour de France’s King of the Mountains competition. Teggart placed 65th, just under three minutes back.