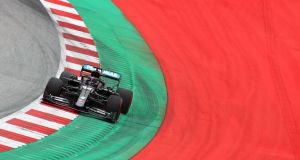 Lewis Hamilton was the fastest in practice for the Austrian Grand Prix. Photograph: Mark Thompson/Getty

Lewis Hamilton’s Mercedes team are set to face a protest from Red Bull as they enter the weekend of the opening race of the 2020 Formula One season.

Continuing their form from winter testing, Mercedes were mighty on the first day of running at a race meeting this year. Hamilton, who is attempting to win his seventh world championship, topped both sessions in a one-two with teammate Valtteri Bottas. They were sixth-tenths clear of Red Bull’s Max Verstappen in the morning and held the same advantage over Racing Point’s Sergio Perez in the afternoon at the Red Bull Ring.

However, off-track the focus was firmly on the Mercedes use of its DAS system – a clever engineering conceit which allows the drivers to push the steering wheel forward or back to manually adjust the toe-angle of the front wheels. Mercedes liaised with the FIA during its development and believe it is legal. The FIA has allowed its use this season although it has been banned for 2021.

With racing finally starting post-lockdown, this is the first chance for a team to formally protest its use. Horner sought clarification on Friday rather than after the race so it is not hanging over the result. “Obviously we’re keen just to get clarity on that system using the mechanisms that are available and getting it addressed quickly early in the weekend,” he said. “We have a difference of opinion on the system.

“Its primary performance isn’t to steer the car obviously so, yes, of course there is a technical position that Mercedes will think one thing, our engineers think something else so in situations like this the best thing is to address it via a protest. The reason to do it today is it feels like the fairest time in the weekend rather than waiting to after qualifying or the race.”

The Mercedes team principal, Toto Wolff, accepted that any protest is a part of F1 but also believed it would be better dealt with sooner rather than later.

“It is the first race, and although it is fair enough seek clarification on the other side we don’t want to end up with a big debate on Sunday,” he said. “Controversy on engineering innovation has always been a part of Formula One and this has to be expected. It is part of the risk. We think we are on the right side, and that is the reason we have it on our car.” – Guardian