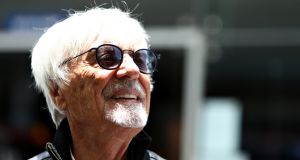 Bernie Ecclestone has claimed black people are “more racist” than white people and said Formula One has been “too busy” to deal with racism in an astonishing television interview.

The former chief executive of Formula One and a name synonymous with the sport said in an exchange with CNN that racism “makes me so upset”. He also said he did not think Lewis Hamilton’s experiences of racism had affected the driver. Hamilton, the six-times world champion, recently said he had felt the “stigma of racism” throughout his F1 career.

Asked by the interviewer Amanda Davies whether Formula One should have done more to tackle racism, the 89-year-old said: “I don’t think anyone bothered about it before. They’re too busy trying to win races or find sponsors or something. Really other things that are of little if any interest.”

While he praised Hamilton for his role campaigning for Black Lives Matters, on the subject of the Hamilton Commission, a body set up by the world champion to help increase diversity in motor sport and overcome the “institutional barriers” the driver said he experienced in F1, Ecclestone said: “I don’t think it’s going to do anything bad or good for Formula One.

“It’ll just make people think which is more important. I think that’s the same for everybody.

Asked about criticism over whether the sport took Hamilton’s complaints seriously enough, Ecclestone said: “I’m really unhappy if he took it seriously. I never thought he did. I didn’t think it affected him.”

Later in the interview Ecclestone went on to suggest it is not even the responsibility of F1 to tackle racist behaviour. “I suppose the people that need to do that are the viewers. For the number of people that are directly involved in sport such a small number of people can do very little,” he said.

“I’m surprised if anyone in Formula One, certainly the teams and the people like the promoters, have any concern about this. I think it’s the public at large that have to start thinking.

“I don’t honestly believe over the years in general people have been that much concerned. They should have been. It’s not a good excuse not to be concerned but everybody’s too busy doing things that they have to do day-to-day to think about something that doesn’t directly affect them. It probably affects all of us but not directly.” – Guardian

4 Time decided football was finally over for Brees. Not for Tom

Doubts continue over Solskjær’s tactics against high-class opponents 13:16
Waterford women’s football association ‘first in Ireland’ to own lands 13:00
Time decided football was finally over for Brees. Not for Tom 12:53
Phil Neville to step down as England head coach with immediate effect 12:23
Chiefs survive loss of Mahomes as Brady wins battle of the veterans 12:04