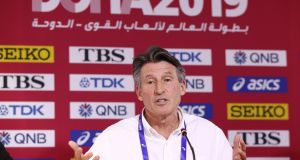 The prospect of a blanket ban on all Russian track and field athletes has increased after World Athletics froze the process allowing them to compete on the international circuit. The decision came a day after the Russians failed to pay a $5 million (€4.5m) fine for doping offences – as well as another $1.31m (€1.2m) in legal costs – to the sport’s governing body.

The decision to put the Doping Review Board on hold means that all Russia’s stars, including the world champion high jumper Mariya Lasitskene and pole vaulter Anzhelika Sidorova, are not allowed to compete as authorised neutral athletes when the Diamond League restarts next month.

The Russia Taskforce, which is designed to steer the country’s return to the international fold, has also been suspended with the World Athletics president, Sebastian Coe, warning that the Russians had fallen “well short of expectations”.

Coe said: “RusAF is letting its athletes down badly. We have done as much as we can to expedite our ANA process and support RusAF with its reinstatement plan, but seemingly to no avail.”

World Athletics decided to issue the unprecedented fine after several Russian officials were banned for fabricating documents purporting to show that the 2018 world indoor high jump champion Danil Lysenko was too ill to take a drugs test – which came from fake doctors operating from a bogus clinic in Moscow. On Thursday the RusAF president, Yevgeny Yurchenko, said his federation’s finances were damaged by the coronavirus pandemic and that it had asked for more time to pay.

The World Athletics council could yet reverse its decision when it meets at the end of the month, but Coe has indicated he is in no mood for compromise. “We recognise these are difficult times, but we are very disappointed by the lack of progress made by RusAF,” he said.

“The serious allegations of breaching the anti-doping rules resulted in a new RusAF administration and we had assurances and hoped that change was on its way. However, the experience of the Russian Taskforce is that this has fallen well short of expectations.” - Guardian

Longford football team of 1968 still deserve special mention 07:00
Niall Quinn and Brian Kerr differ on role of outsiders in FAI 06:00
New team, fresh start, has Dan Martin shooting for the stages 06:00
Sporting Cathedrals: Cheltenham reveals all about the wonder of racing 06:00
Fathers, sons and soccer: Reflections on the family business 06:00
Here is your handy guide to sport on television this week