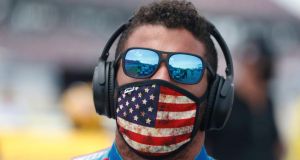 The FBI has concluded Bubba Wallace was not the victim of a hate crime. Photograph: John Bazemore/AP

The US Justice Department said that there had been no federal crime in the placement of a noose that was found this week in the Talladega Superspeedway garage stall assigned to Darrell Wallace Jr., the lone black driver in Nascar’s premier series.

It was there last year, long before Wallace was assigned to the spot at the Alabama track for a race this week, the federal authorities said. Nascar said that a pull rope for the garage door had been “fashioned like a noose” and left there.

“We appreciate the FBI’s quick and thorough investigation and are thankful to learn that this was not an intentional, racist act against Bubba,” Nascar said in a statement, using Wallace’s nickname.

Richard Petty Motorsports, which owns Wallace’s No. 43 car, said it was “grateful the findings conclude there was no direct threat” to the driver or others associated with his team.

In an interview on CNN on Tuesday night, after hours of debate on social media over whether the episode was a hoax, Wallace emphatically denied that he had any role in placing the noose and said he had never before seen a knot like that at a track.

“I’m mad because people are trying to test my character,” he said.

Neither the federal authorities nor racing officials gave any public indication of who might have tied the knot, which Wallace described on CNN as “a straight-up noose,” or their intention in doing so. Wood Brothers Racing, a fixture of the stock-car circuit, said in a statement that one of its employees had this week recalled “seeing a tied handle in the garage pull-down rope” last year and that the team quickly notified investigators.

The disclosure of the noose late on Sunday came as Nascar confronted its history on race and its record as a safe haven for the Confederate battle flag. And the inquiry’s swift conclusion could help the motor sports empire to edge away from one of the most tumultuous periods in its history, even though the USA remains engaged in far-reaching debates about endemic injustice.

That national turmoil, which intensified after George Floyd’s death in Minneapolis police custody in May, helped prompt Wallace on June 8th to urge Nascar to banish the battle flag. The company did so two days later, barring it at the organization’s events and properties.

Then, after a competition in South Florida, the racers and their crews headed to Talladega, a track renowned for its speed and etched into the culture of Southern stock-car racing. Finished in 1969, after the crucial support of George C. Wallace, the segregationist Alabama governor, the track has drawn millions of fans but also earned a reputation as a place particularly welcoming of Confederate symbols like the battle flag.

Although Nascar’s flag ban appeared to work on Sunday – in spite of protests from some fans – the noose was soon spotted in Wallace’s garage stall, prompting anguish and fury within a sport that had sometimes only tepidly tried to put distance between its past and its present.

By the time of the green flag in the weather-delayed Geico 500 on Monday afternoon, competitors had rallied around Wallace, the justice department had announced its review and Nascar had vowed to expel any wrongdoers from its ranks. With access to Talladega, especially its work areas, tightly controlled because of the coronavirus pandemic, officials indicated that they were focused on whether someone directly tied to Nascar was responsible.

The investigation ended quickly: Jay E. Town, the United States attorney for the Northern District of Alabama, and Johnnie Sharp Jr., the head of the FBI’s office in Birmingham, Ala., said that their evidence, including video footage, showed the noose in the garage as early as October 2019.

“Nobody could have known Mr. Wallace would be assigned to garage No. 4 last week,” they said, adding that “the decision not to pursue federal charges is proper after reviewing all available facts and all applicable federal laws.”

Although the government’s intervention signalled the gravity of the episode, the justice department and outside experts said from the inquiry’s start that there was no guarantee that prosecutors would pursue charges. A charging decision, current and former US officials said, would be based on a number of factors, including a person’s intent and the capacity in which that person was in the garage at Talladega.