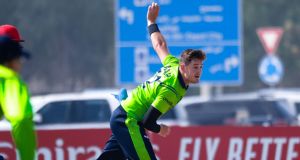 Mark Adair and Paul Stirling were the standout performers as Ireland hammered Jersey by eight wickets at the T20 World Cup Qualifier in Abu Dhabi, boosting their net run rate in the bargain as they chased down a target of 106 in just 14 overs.

Oman’s dominant performance in beating Canada by eight wickets in the late Group B match pushed Ireland up to second in the table going into their final game against bottom-placed Nigeria on Saturday morning.

The top team in each of the two groups goes straight to the semi-finals and also earns qualification for next year’s finals in Australia, with Oman looking nailed on with a final game to come against Jersey on Sunday.

The second and third placed teams in each of the two groups play off for the other semi-final slots and a trip down under.

Adair took three wickets for just 10 runs in his four overs after taking the new ball, with all six Irish bowlers taking a wicket, while David Delany also impressing with figures of two for 12 before having to go off injured.

Stirling then hit an unbeaten 58 from 37 deliveries, his third half-century in five games in the tournament, as Ireland eased to victory against the Channel Islanders.

Ireland skipper Gary Wilson was delighted that his side bounced back from the defeat to Canada and that they must now earn another convincing win against Nigeria on Saturday morning.

“It was obviously very important to bounce back strong, if we didn’t we may have been out of the competition,” said Wilson. “So it was pleasing to get a win today and hopefully we can take the momentum into tomorrow and move on from there.

“Crucial tomorrow will be run rate, which will be important, but first we have to win the game. Nigeria are a bit of an unknown quantity for us, so we’ll have a look at the footage from the previous games and look to tackle them the best way possible. We’ve played some good cricket today, so hopefully we can continue that into tomorrow.”