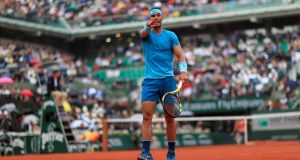 Rafael Nadal is a set down against Diego Schwartzman in their French Open quarter-final match at Roland Garros. Photo: Gonzalo Fuentes/Reuters

Rafael Nadal can still win this French Open, but he will have to carry the late momentum of his rain-interrupted fightback against the redoubtable Diego Schwartzman into the resumption on Thursday if he is not to be the author of his own exit from a tournament he virtually owns.

For a worryingly long time on day 11, pessimists were calculating that a less than stellar final here between two players outside the top 10, Schwartzman and Marco Cecchinato, was a slim possibility. Cecchinato, the world No 72 who bundled the former champion Novak Djokovic out of the tournament on Tuesday, gets his chance to go forward on Thursday, when he plays Dominic Thiem in the first semi-final. A win is not impossible for the Italian.

Nadal, meanwhile, gave substance to the speculation when Schwartzman, the robust Argentinian world No 11, rocked him out of his comfort zone to break his run of 37 unbeaten sets.

When play was abandoned under storm clouds about the time most Parisians head for their evening meal, Nadal had repaired much of the damage inflicted on him in the first set, which Schwartzman won 6-4 in and hour-and-a-quarter. He broke the Spaniard three times – then twice in the second.

But Nadal, as he has done so often, averted catastrophe after a 53-minute “interrompu” for rain, when he returned trailing 2-3 and a break to grind his way to a 5-3 lead. He had the ball in his hand at 30-15 when they left Court Philippe-Chatrier for the last time.

On Court Suzanne-Lenglen, Juan Martín del Potro and Marin Cilic were locked at 5-5 in the tie-break after squeezing in 71 minutes of tennis.

Nadal raised minor concerns when he had both wrists wrapped between sets, although Alex Corretja, once Andy Murray’s coach, reckoned they were to soak up sweat rather than wrap an injury. Perhaps.

Whatever his woes, most of them were provided by Schwartzman, whose aggression caught him out time and again. Nadal, who is reaching for his 11th title here, insists wisely there are no certainties in sport. But even he must feel he has the pedigree to subdue this uplifting challenge from one of the sport’s toughest competitors. – Guardian service