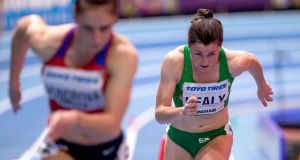 Phil Healy missed out on the 400m final in Birmingham. Photograph: Morgan Treacy/Inpho

World Indoor 400-metre running is always something of a lottery but for Phil Healy the numbers didn’t quite come up in order to progress to the final.

Having ridden her luck a little in her heat earlier in the day, Healy ended up third in her semi-final - with only the top two going through.

The Cork woman did benefit from one athlete being disqualified ahead of her, Maria Belimpasaki from Greece, as indeed were athletes in each of the other two semi-finals, including medal favourite Stephenie Ann McPherson from Jamaica (in the second semi-final).

“I wanted to go out there and die fighting, and that’s what I did,” said Healy, who at 23 enjoyed a breakthrough season and still has more to come.

In her first experience of the World Indoor Championships, Healy certainly made those margins count to progress earlier. Running in the fifth of the six heats inside the Birmingham Indoor Arena, with only the top-two finishers sure of progressing, Healy took it out hard, and held the lead through the first lap in a nifty 24.03 seconds.

Coming off the final bend however, she was passed first by McPherson from Jamaica, then Britain’s Eilidh Doyle, and although visibly tiring, held on for third, clocking 52.75. Although outside her best of 52.08, it was the best of the fastest losers, six of which also progressed to the semi-finals.

Only this time she found herself in fourth at the break, having been drawn in lane one, and that’s as close as she got, before the DQ: her semi-final was won by gold medal favourites Courtney Okolo from the US in lane five, who ran 51.79.

Also disqualified in the first semi-final was Léa Sprunger from Switzerland, although there even greater carnage in the heats of the men’s 400m earlier in the day, when all five athletes in one heat were disqualified for various rule infringements.

“I always knew it was going to be a testing for 100m, with Stephenie and Eilidh,” Healy said after her heat, actually the first Irish woman to make a World Indoor semi-final in this event.

Juan Miguel Echevarria of Cuba was a brilliant winner of the long jump with a massive world-leading jump of 8.46m, beating World outdoor champion Luvo Manyonga of South Africa, who took silver with a leap of 8.44, still an indoor African record.