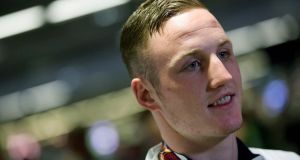 Michael O’Reilly became the first Irish athlete to be sent home from an Olympics for failing a doping test. Photograph: Donall Farmer/Inpho

Irish middleweight Michael O’Reilly has been banned from boxing for four years for testing positive for a performance-enhancing anabolic steroid.

O’Reilly, who won a bronze medal at the World Championships in Doha in 2015 and a gold medal at the European Games in Baku in the same year, was removed from the Rio Olympic Games in August 2016, when a urine sample he provided in July of that year tested positive for methandienone.

O’Reilly was notified of the positive test result on August 4th and was provisionally suspended from August 5th before being removed from the athlete’s village in Rio and sent home.

The panel investigating the positive finding concluded that the 24-year-old had “not discharged the burden of proving that his admitted anti-doping rule violation was not intentional”.

They therefore deemed it intentional and accordingly imposed a four-year period of ineligibility as is required by the Irish Sports Council Anti-Doping Rules.

O’Reilly was one of the most talented middleweight boxers in the country and also one of the most troublesome, having been disciplined previously by the Irish Athletic Boxing Association (IABA).

The O’Reilly case also proved to be one of the longest if not the longest running in Irish sport and was complicated by the fact that the disgraced boxer received a five-month prison sentence in October of last year after admitting causing criminal damage to a caravan following an engagement party.

O’Reilly’s case also made world headlines as it broke in Rio on the same day as the draw was being made for the Olympic boxing tournament, one day before the Games were officially due to start on August 5th.

None of the Irish boxing coaches had been briefed about the positive test, which led to chaotic scenes outside the hotel in Rio, where the tournament draw was being made.

Head coach Zaur Antia, Eddie Bolger and John Conlan ended up sitting in a bus outside the hotel surrounded by television cameras and media and frantically trying to find out information on their phones.

Conlan, who is the father of World Amateur Champion Michael and a coach on the Irish team commented at the time.

“There is no getting away from it. It has embarrassed us as a team,” said Conlan.

The investigating panel also failed to be satisfied that the evidence of the Portlaoise BC boxer gave any basis to reduce or eliminate the four-year period of suspension.

The Tokyo Olympic Games in 2020 begin on July 24th and run until August 9th.