Ciara Mageean misses out on World Indoor final in Birmingham 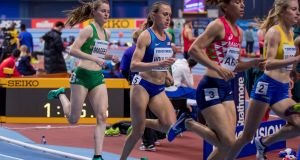 Ciara Mageean on her way to a 7th place finish in her 1,500m heat in Birmingham. Photograph: Morgan Treacy/Inpho

Ciara Mageean kept saying Birmingham was just a sort of drive-by on route to the bigger championships later this season, although it probably didn’t help that she found herself caught up in the shoot-out of one of the most competitive events at these World Indoor Championships.

Indeed the heats of the women’s 1,500 metres included all three medallists from the 3,000m, staged on Thursday evening - including defending 1,500m champion Sifan Hassan from the Netherlands, plus the Ethiopian Genzebe Dibaba, who had just won her third consecutive World Indoor title over the longer distance.

So for Mageean, who in November moved to Manchester and switched coaches, qualifying for the final was always something of a lofty target, and so it proved. Only the first two home from the three heats, plus the three fastest losers, went through to Saturday’s final: drawn in the third heat, alongside the likes of Hassan, Mageean struggled with the fast pace and drifted off the field by 800m.

She made up one place in the end, finishing seventh in 4:11.81, actually not far off her season best of 4:09.47 run at the Boston Indoor Games last month. Certainly no place in the final then, but a useful test of where she is nonetheless, as Mageean’s thoughts turn to the Commonwealth Games on Australia’s Gold Coast in April, then the European Championships in Berlin next August.

“Birmingham really hasn’t been my focus at all,” she said - her heat won by Hassan in a nifty 4:05.47, a season best. “I know as well I’ve quite a bit of training to do before the Commonwealth’s, I’m not at a peak, and this is the chance for a good competitive race over 1,500m.

“It’s just so handy, so close, and a good test to see where I am right now, without it being the sole focus. And because the Commonwealth’s are in April, at the end of the Australian season, we don’t have many chances to race 1,500m without doing indoors.”

Second to Hassan was the Kenyan Winny Chebet in 4:05.81, also a season best. Mageean needed to better 4:07.51, had she finished better than seventh, but that sort of time simply wasn’t there on the night.

Two other Irish women on the track earlier in the day, in the heats of the 60m, didn’t progress: Amy Foster did enjoy a good start in her heat, before fading slightly to finish fifth in 7.35, and overall left just four places short of qualifying.

“Not a bad run,” said Foster, who had run an Irish record of 7.27 earlier this month. “Just not the run I was looking for.” In the first heat, Limerick teenager Ciara Neville had a slightly harder time of things, running 7.47 to finish seventh - well outside her best of 7.30.

The other women’s 1,500m heats, meanwhile, proved equally competitive, the second heat won by the Kenyan Beatrice Chepkoech from Kenya in 4:09.13, with Dibaba winning the first of those three heats, quicker again in 4:06.26, with Britain’s Laura Muir just a stride ahead.

That sets up another fascinating final on Saturday, after the 3,000m showdown where Muir won a quite brilliant bronze medal behind Dibaba and Hassan - the first major global championship medal for the British runner, who was just run off the podium at the World Championships in London last August.

Dibaba was content to sit at the back of the field for the first kilometre, before the 27-year-old surged with just under 2000m remaining and was never seriously challenged, galloping to victory in 8:45.05; judging by her victory in the heat of the 1,500m the double is clearly within her reach

Muir just narrowly failed to overtake Hassan in the closing stages, and may well move up a place in the shorter distatance. At one point on Wednesday evening, Muir feared her hopes of a first global medal were lost due to the snowy conditions, only for a £1,500, seven-hour taxi ride later to get her to Birmingham on time

“There was a time when I thought we weren’t going to make it,” said the 24-year-old Muir, who is in the final year of her veterinary degree at the University of Glasgow, and on Wednesday had started working in a small animal hospital. “When we were leaving the house there was a lot of snow and the taxi was two hours late, so we didn’t know then if it was going to turn up.”

A silver medal appeared to be in her grasp until Hassan swerved out from lane one to three on the final bend to stop her passing. “I knew Dibaba was going to make a big move,” added Muir, who finished in 8:45.78, just 0.73sec behind the Ethiopian and 0.10 behind Hassan. “So it was a matter of not over-exerting myself and falling off a cliff like I did in Rio. I raced smart and came away with a medal, which was the main thing.

“I’ve known the ability is there. It’s just been a matter of trying to judge it tactics-wise. I’ve been fourth, fifth and sixth at world championships and seventh in Rio, so to come away with a bronze here is excellent.”