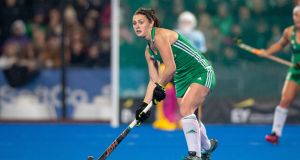 Ireland’s Róisín Upton: “There’ll be around 40 of us training, all trying to make a squad of 16, so it’ll be extremely tough, but it has to be.” Photograph: Morgan Treacy/Inpho

A lively first half to the Hockey League season ends this weekend with the final round of matches before the winter break, the campaign not resuming until the beginning of February.

Pegasus who lead the way after last Saturday’s remarkable performance against Pembroke Wanderers when they came back from 3-0 down to take the points.

The defending champions will expect to maintain that lead going in to the break with bottom club Belfast Harlequins their opponents on Saturday, Cork Harlequins the only other side in the league yet to pick up a win.

Cork head for Limerick to take on Catholic Institute who have a double-header this weekend, Loreto their visitors on Sunday. Before then Loreto host Railway Union at Beaufort while Pembroke have a home game against Muckross.

Pembroke and Old Alexandra, who play UCD on Sunday, are tied on 12 points, three behind Pegasus, with the students and Loreto another two back.

The Irish squad, meanwhile, is preparing for a busy start to 2020, a trip to South Africa in January and Malaysia in March already pencilled in to a schedule that will fill out further in the weeks ahead.

Gruelling as the build-up to Tokyo will be, with competition intense for those 16 places in Ireland’s Olympic squad, it’s one Roisín Upton is relishing.

“You have to enjoy the journey, as difficult as it will be. There’ll be around 40 of us training, all trying to make a squad of 16, so it’ll be extremely tough, but it has to be – we’re going somewhere we’ve never been,” said the Catholic Institute player who will return to action after Christmas having broken a bone in her arm during the second Olympic qualifying game against Canada.

“We had a great couple of weeks celebrating, the support we got was surreal, but we’re back now doing physical work and we’ll get back to the hockey in January.”

“Training from July to November was probably the toughest few months that we’ve all ever experienced, Sean [Dancer] upped it five notches, it was absolutely gruelling. But it’s what we needed, and we’ll need that level of intensity again in the coming months.”