Cycling: Bennett’s move could lead to his best season yet – Kelly 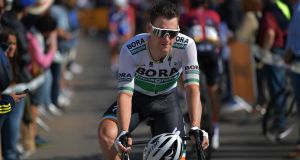 Sam Bennett: this week Deceuninck-QuickStep confirmed the signature of the Irishman who spent several seasons with the Bora-hansgrohe team. Photograph: Justin Setterfield/Getty

Sean Kelly has hailed Sam Bennett’s move to the Deceuninck-QuickStep team, saying that he believes the transfer could lead to the best season yet for the Irish rider. Both Kelly and Bennett come from Carrick-on-Suir and the former has kept close tabs on the career of the younger cyclist.

Bennett competed for several years with the An Post Sean Kelly tem and since turning professional in early 2014, Kelly has seen him evolve into a proven winner. This week Deceuninck-QuickStep confirmed the signature of Bennett after months of speculation.

“I think it is the best team for him, because they have very good experience there,” Kelly told the Irish Times on Thursday, applauding the move.

“They have a really good lead-out train for sprinters. That is what Sam needs, he needs a clean run to the line and to be released at 200 metres to go.”

Bennett has competed for several seasons with the Bora-hansgrohe team. He notched up 13 victories this year, including two stages in the prestigious Vuelta a España. He would likely have taken several more wins had the team not given precedence in selection to former world champion Peter Sagan and the young German rider Pascal Ackermann.

Because of those selection decisions, Bennett missed out on competing in the Giro d’Italia, where he won three stages last season. He was also absent from the Tour de France, a race that will be a major goal for him in 2020.

Selection issues aside, a second problem with Bora-hansgrohe is that the squad doesn’t have the same strength in depth as his new squad.

“Bora were also looking after other types of riders too – in the Vuelta this year, there were some days on the flat where they were prioritising their general classification men. That meant that Sam had very few to look after him and that is where he lost out a number of times, finishing so many times second.”

Indeed Bennett was runner-up on no less than four stages in the race. With stronger, more committed backing, he may well have won each of these, potentially finishing the race with six victories.

Kelly is excited about the prospect of Bennett having much better support. He is clear about his quality.

“I think once he gets to that 180, 200 metres to go, if you can get him into the right position and release him then, then he is unbeatable.”

That also applies to the Tour de France. Kelly is clear that Bennett has the potential to win at least one stage there, which would be a significant progression in the 29-year-old rider’s career. He hasn’t competed in the race since 2016, when ninth on the final stage proved his best result.