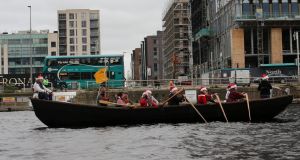 The Lagan Currach, the longest currach in the world, in action on the River Liffey during the recent ‘All In A Row’ fundraiser.

Inland Fisheries Ireland (IFI) has noted with concern the latest findings from the Water Quality in Ireland Report for the period 2013-2018, published last Tuesday by the EPA.

The report shows a decline in river water quality and a further loss of pristine river water bodies. It also highlights that fish kills increased to 40 in 2018 after a historic low of 14 in 2017.

Commenting on the report, Dr Byrne, IFI’s CEO, said: “The decline in water quality and, in particular, river quality since 2015, shows an increase in pressures coming from human activities.

“These activities such as agriculture, waste water issues, forestry and hydromorphology are putting pressure on the aquatic environment, which in turn can have long-term impacts on our fisheries resource.

“It is extremely disappointing that the percentage of high quality biological river sites with undisturbed natural conditions has decreased from 31.6 per cent in 1987-1990 to 17.2 per cent in 2016-2018.

“Of the 40 fish kills in 2018, 15 were caused by disease or natural causes, seven by agricultural practice, eight by municipal works, two by industrial operations and a further eight had unknown causes.

Dr Byrne continued: “During periods of low water levels and warm water temperatures, there are additional pressures on Ireland’s watercourses as a result of reduced oxygen in the water.

“Any poor quality discharges to rivers and lakes, such as silage effluent or sewage discharges can put extra demands on oxygen levels, resulting in pollution incidents and fish kills.

“In the context of climate change, we anticipate that fish kills will continue to increase. This issue is even more critical when we consider that rivers with poor water quality do not have the resilience to deal with pollution events during periods of stress.

“Radical change is needed if we are to ensure the sustainability of our valuable fisheries resource into the future,” he concluded.

Minister announces grants worth over €1 million

The Minister with responsibility for inland fisheries, Sean Canney, has announced funding of €1 million to 25 projects in 16 counties including two nationwide initiatives. The grants will support conservation, protection and education schemes, and provide the public with greater access to fishing sites around the country.

Projects to receive funding include a research project to examine sea trout decline in the Currane catchment in Kerry (€187,089); conservation works to improve salmon habitat on the Oily River, Donegal (€25,176); support for wheelchair accessibility on Lough Ree in Roscommon (€50,000).

Support also for third phase of River Easkey project in Sligo for provision of stiles and footbridges at 32 locations (€33,300) and construction of a fish pass to extend salmon migration on the Marty River, Co Meath (€100,000).

“The range of projects which we are supporting gives an insight into the diverse requirements of the fisheries resource as the demand for funding for fisheries projects continues across the country,” the minister said.

For full list of projects to receive funding, visit www.fisheriesireland.ie/funding.

The petrol engines available for hire heretofore will be withdrawn and anglers are now advised to bring their own battery engines. Boat hire, including a one-day fishing permit for up to two anglers, will remain at €30.

The team help the organisation to achieve its energy reduction target of 33 per cent by 2020 and devise solutions to support society in reducing its environmental footprint.

Shepperton is a popular winter pike angling destination attracting local and visiting anglers to the area. As shore angling is not permitted, anglers are advised to book a boat from Mrs E Connolly at 028 33328 in advance.

‘All In A Row’ fund-raiser on River Liffey
‘All In A Row 2019’ created a fantastic spectacle on the capital’s River Liffey recently to challenge teams rowing 40 skiffs, kayaks, canoes and currachs to exceed a 1,000km target in eight hours to raise funds for the RNLI and Irish Underwater Search and Recovery Unit.

One of the highlights included the Lagan Currach, credited as the longest currach in the world, weighing in at one ton and 10 metres (33ft) in length!

1 Gerry Thornley: Saracens very late to apologise for repeated cheating
2 Welcome to Iten in Kenya – home of champions and cheats
3 How Silvio de Sousa fell victim to the seedy underbelly of US college basketball
4 Solskjær can’t guarantee Rashford will play again this season
5 Donegal’s Yvonne Bonner very much up for Down Under
Real news has value SUBSCRIBE