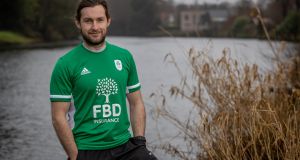 Paul O’Donovan expects it to be very competitive to get a seat in the lightweight double sculls boat for the Tokyo Olympics. Photograph: Morgan Treacy/Inpho

His dark brown hair stretches down over his shoulders, his face unshaven for weeks it seems, and it’s been almost a year and a half since he last rowed for Ireland. What might this mean?

Turns out this somewhat unrecognisable image of Paul O’Donovan, speaking via Zoom from his student accommodation at UCC, in no way reflects his enduring ambition to chase more glory in the lightweight double sculls at the Tokyo Olympics, assuming of course they still press ahead this summer, one year later than originally planned.

That will be five years on from when O’Donovan partnered his older brother Gary to the Olympic silver medal in Rio, and some things have changed since then: he was in the boat with Fintan McCarthy when winning gold at the World Championships, in Austria, at the end of August, 2019, and O’Donovan hasn’t rowed competitively since.

Indeed there’s no guarantee he’ll even make the first choice pair, although Shane O’Driscoll’s decision to opt out for career reasons means it’s effectively down to the O’Donovan brothers and the McCarthy twins, Fintan and Jake, who also hail from Skibbereen.

For O’Donovan, who turns 27 in April, the refocus on Tokyo is further underlined by the fact he’s taken another sabbatical from his medical studies at UCC, where he is still based, his daily rounds and efforts now at the National Rowing Centre here in Farran Wood, outside of Cork.

Like his older brother Gary, O’Donovan’s often playful but no less serious approach to rowing also remains firmly intact, and any talk of Tokyo happening or not at this stage, still six months away, is greeted with the sort of laid back response that made them both so endearing.

“You have to go with the flow,” he says. “You think of all the possible situations before, you either make the crew or don’t make the crew, and if you make the crew you perform well and you win a medal or you don’t win a medal. You just think how is that going to affect your life afterwards.

“In the end it doesn’t make that much of a difference. People think that winning a medal would be the happiest moment of your life and remembered for ever more. But really like the happiest doesn’t last that long – maybe half an hour of peak happiness and then it declines pretty quickly. After a few days or even a day you don’t think about it at all. You must totally forget about it.

“So when you do that and know what the outcomes are and how you are going to get on with life after, it is a bit easier to be a bit calm when you are approaching the situations, and you just got to manage the stress as well. There is a bit of a sweet spot in how much stress you leave yourself build up because some of it is quite good and too much is bad. And no stress isn’t ideal either.”

Life, in other words, will move on with or without the Olympics, and it seems O’Donovan is already well prepared for either outcome. He admits too there’s no guarantee he’ll even get that seat in the boat come Tokyo, although at his best, few rowers in the world would keep him out of it.

“Shane [O’Driscoll] left the group during the summer, he’s taken a job in engineering. So there’s myself Gary, Fintan and Fintan’s brother Jake. Unfortunately Jake had a disc injury in his back there during the summer so he’s been spending a lot of the winter recovering from that and doing bits on the stationary bike.

“Some people assume that I’m in the boat and that I have to think about being in peak shape in the last week of July for the games but selection for the boat is really early and the boys are in better shape than they’ve ever been as well so it’s going to be really competitive to make the boat.”

His lack competitive rowing since August 2019, if anything, has perhaps only deepened that ambition: “Internally we’ve done a lot of racing amongst ourselves and we have a really good squad to race against. You don’t think about the motivation a lot of the time, it’s a habit, like you get on with things more than anything. We also know that rowing isn’t going to last forever unfortunately, and we just do things that make that transition to real life a bit easier when that does happen.”

– Paul O’Donovan was speaking at the announcement of the FBD Make a Difference, in conjunction with the Olympic Federation of Ireland OFI, a €50,000 fund to assist 20 rising Olympic hopefuls in their preparations for Tokyo