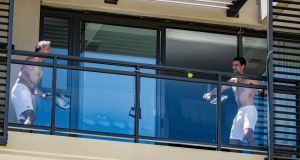 Novak Djokovic playing tennis on his balcony at the M Suites in Adelaide. Photograph: Morgan Sette/AFP via Getty Images

Novak Djokovic has defended his “good intentions” after receiving intense criticism for providing Tennis Australia with suggestions on how to improve player conditions and ease some of the protocols in their hotel quarantine.

After the complaints from players in the first days of their hotel quarantine in Melbourne, Djokovic addressed players in their WhatsApp group before sending a list of suggestions to Tennis Australia’s chief executive Craig Tiley.

The suggestions in the leaked list ranged from more exercise equipment for players unable to practice to houses with tennis courts for players. It led to widespread condemnation, including from Nick Kyrgios, who branded him a “tool”.

“My good intentions for my fellow competitors in Melbourne have been misconstrued as being selfish, difficult, and ungrateful. This couldn’t be farther from the truth,” wrote Djokovic in a lengthy statement.

“I’ve earned my privileges the hard way, and for that reason, it is very difficult for me to be a mere onlooker knowing how much help, gesture, and good word mattered to me when I was small and insignificant in the world pecking order. Hence, I use my position of privilege to be of service as much as I can where and when needed.”

Djokovic also noted that he had attempted to stay in Melbourne rather than Adelaide – where Djokovic, Rafael Nadal, Serena Williams, Naomi Osaka and other top players are in quarantine – but he was not allowed to do so. This comes after Tiley defended the preferential treatment said to be received by the top tennis players.

The top players are said to be in more favourable conditions and have been allowed to travel with larger teams than their colleagues, most of whom have been restricted to only two team members. Tiley said that the decision was taken because of the limit on hotel quarantine arrivals in Melbourne.

“There the top players do have better living conditions because they have a balcony,” said Tiley. “I get the feeling that it’s perceived as preferential treatment, but they’re the top players in the world, it was an advantage for us to get the additional quarantining space and it’s a great opportunity for Adelaide and they deserve it.

“My general rule is that if you’re at the top of the game, a Grand Slam champion, it’s just the nature of the business – you are going to get a better deal.”

In Melbourne, the world No 28 Yulia Putintseva has received a particularly rough deal. After encountering a mouse in her first hotel room, she was moved the next morning at 3am, only to discover mice inside her new hotel room and in the corridor outside of her room. Putintseva is also one of the 72 players confined to their hotel rooms without practice for two weeks.

Victoria state police minister Lisa Neville offered little sympathy on Wednesday, instructing players not to feed mice in their hotel rooms after a tennis player said that her room was infested.

“As I understand there may have been some feeding going on,” said Neville. “I just encourage them to minimise interaction with the mice, we will keep doing pest control if we need to, but hopefully that pest control work that was done this week will have fixed the problem.”

Elsewhere, Judy Murray confirmed on BBC Breakfast that her son Andy will complete his isolation period today after testing positive for coronavirus shortly before he was due to fly to Australia alongside his peers in the charter flights last week.

“He’s doing okay,” said Judy Murray. “I think he gets out today so he can resume some training and then, of course, it’s a question of waiting and seeing when he is able to fly out to Australia and take part. Nobody knows the answer to that one yet.”

Andy Murray is still looking to see if it will be possible for him to belatedly fly to Australia, but it remains a challenging proposition that could invite further criticism. Should he even be allowed to travel to Australia by the state government, he would emerge from the mandatory 14 day quarantine with only a few days before the tournament begins.

There was also a health scare on Wednesday as prominent Brazilian umpire Carlos Bernardes was transported to hospital in an emergency ambulance. According to Brazilian tennis website Tênis News, Bernardes suffered a heart attack “but he is well”.

In total, 10 coronavirus cases in hotel quarantine have now been linked to the tournament. Melbourne has not had a new infection within the wider public community in 14 days. – Guardian