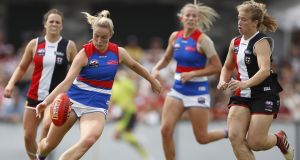 As she prepares for her third season in the Australian Football League, Aisling McCarthy is reflecting on her adventure so far, although she can’t think of many experiences along the way that felt as unique as her visit to Perth’s Optus Stadium two Saturdays ago.

Along with her new team-mates Grace and Niamh Kelly, she was part of a 27,566 crowd that attended the Big Bash cricket game between Perth Scorchers and Sydney Thunder. Not long before, the trio had been home in Ireland where crowds of that size seemed like a dim and distant memory.

“We were looking at each other thinking: ‘We’re all way too close! There are no masks! There’s no social distancing! It felt . . . weird,” she laughs. “We were pinching ourselves, we were just thinking of the life we’d left back home.”

It more ways than one, then, it feels like a very long way from her home patch of Cahir, Tipperary to Perth, Western Australia where McCarthy, an intermediate All-Ireland winner with her county in 2017 and 2019, is starting the latest leg of her journey.

It was back in 2018 in the middle of an October night that she sat watching live streaming of the AFLW draft and 90 minutes in her name still hadn’t been called out. Then, finally, pick number 23, she had been selected by Melbourne’s Western Bulldogs who liked what they had seen when McCarthy took part in a Cross Coders trial in the city the month before.

The timing, she says, was perfect. “I had graduated from college that year so I had my degree under my belt. Once I got the blessing from Tipperary, that I’d be welcomed back in to the championship panel when I came home, there was nothing really holding me back.

“I never went travelling before, I never went on a J1 or anything, I always stuck around to play for Tipp during the summer, so it was really nice to be able to go off to a different part of the world, as well as having the chance to play a sport professionally.”

And after two seasons with the Bulldogs, where she developed in to one of the league’s leading midfielders, McCarthy found herself on West Coast Eagles’ most wanted list, switching to the Perth club back in August, making her the first Irish woman to be traded between Australian clubs.

Part of the attraction for McCarthy was the ambition of the club, which made its debut in the league last season, but also its willingness to help her develop her physiotherapy career, her visa only allowing her to play football in Australia.

“That was really important because I’m not going to be a footballer for the rest of my life, so I need to develop my career away from sport,” she says. “I had to park it for the two six-month stints that I was in Melbourne, but when I spoke to West Coast they said they’d arrange for me to shadow one of their physios at their clinic, which I will do from next month. That way I can develop my skills and stay fresh.

“It’s a brilliant club, from the moment I talked to them I could see that they want to develop their players not just as footballers, but as people as well, and to help with their careers. They’ve left no stone unturned in making my transition to life in Perth as easy as possible, they make sure everything off the field is dealt with, the only thing you have to think about is just enjoying your football.”

What helped too was having the Kelly sisters already at the club, the Mayo footballers debuting for West Coast last season, McCarthy now sharing a house with them.

“When we come home in the evening we could be in a living room back in Ireland because it’s just the three of us, so it doesn’t feel like you’re too far from home,” she says.

“It was definitely a little bit daunting moving to a totally new part of Australia, but Grace and Niamh have been great, they’ve really helped me settle in. It’s a lovely spot to live in, it’s different to Melbourne, a bit more chilled, although I’m still getting used to the heat – it was 40 degrees the first couple of days I was here, so that was a bit of a shock to the system. But it’s so nice here, the beaches are amazing, it’s a beautiful place.”

When the 2020 season in Australia was cut short in March after the Covid-19 outbreak, McCarthy headed for home, working for a spell as a physiotherapist in the Midlands Regional Hospital in Portlaoise and, when football resumed, getting back in to action with club and county. She was on the Cahir team that won the county title, but one-point defeats by Galway and Monaghan ended Tipperary’s championship at the group phase.

She returned to Australia in December and is now in the final stages of preparing for the new season which, for West Coast, is due to begin on Saturday week against Gold Coast in Queensland. With Australia’s strict Covid-19 measures, though, which include some states closing their borders, there are still a few ifs and buts about the campaign ahead.

“We’re actually not too sure at the moment how it will go, we have to remain flexible for round one. As things stand, we’d have to go in to quarantine for two weeks after coming back from Queensland, they’re the rules in Western Australia, so we’re just waiting to see if that changes. If not, then there’ll probably be a fixture change. We’d be able to play Fremantle, for example, because they’re based in Perth, or Adelaide because their borders are open to Western Australia. We’ll see how it goes.”

Whatever happens, McCarthy is raring to go. She scored three goals in the first quarter of her debut for West Coast last weekend in a pre-season game against Fremantle, although her mood turned on hearing the news of Bríd Stack’s injury in her debut for Greater Western Sydney Giants.

“I was with the girls recovering at the beach when we heard the news, it was such a shock. We just knew that Bríd was in hospital getting scanned, so we were all anxiously waiting for those results. The relief in the end was just huge, I know Bríd picked up a nasty injury, but it could have been so much worse.

“Football will be on hold for her for the minute, which is so unfortunate because she gave up so much to come out here, but the main thing is that she’s going to be healthy. A lot of my sporting role models would have come from that brilliant Cork team that Bríd was such a big part of, I’ve nothing but admiration for her.

“The physicality of the game here is one of the biggest things you have to adapt to as a Gaelic footballer, you get bashed and bruised, the hits are hard, it’s a real shock to the system when you start out. And you have to get used to the oval ball, the skills, the tactics, the structures, it can be mind-boggling at first, but you learn, you progress, and eventually the rules come as second nature, it becomes more natural and you begin on play on instincts.”

More than anything, McCarthy’s intent for the year ahead is just to enjoy her football, whether it’s of the Aussie or Gaelic kind.

“It’s something I worked on during Covid. Over the years I probably thought that football was the be all and end all, it would have effected my mood off the pitch if I didn’t play well. It was only when it was taken away that I realised just how much I enjoy playing football, that I needed to stop being so hard on myself. It’s only a game. You play it because you love it, that’s why you’ve been playing it since you were a little girl. So, this year, whether with West Coast or Tipperary, I’m just going to enjoy every moment.”