Time decided football was finally over for Brees. Not for Tom

Tom Brady and Drews Brees faced off in the Superdome, one of them refused to lie down 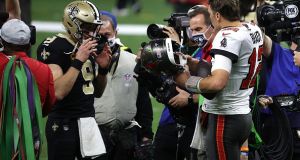 Two future hall of fame quarterbacks faced off in the Superdome this weekend. One of them, as he always has, simply refused to lie down

The first time Tom Brady and Drew Brees met on a football field was October 2nd 1999. TLC’s Unpretty was hogging the top spot on the Billboard 100. Y2K was hot on the mind.

It was fitting, then, that the first and likely only playoff meeting between the two, now with a combined age of 85, delivered the most old-school matchup of the weekend. The game was billed as Tom Brady v Drew Brees, two future hall of fame quarterbacks at the end of their respective runs. Instead, we were treated to a classic bout of January football, all run games and defence and turnovers.

It’s the final factor in that list that really matters. It’s always about turnovers. The tally from Sunday night: Saints 4-0 Bucs. Final score: Tampa 30-20 New Orleans. 21 of the Bucs’ points came from those turnovers.

Was this Brees’ final game? It certainly seems like that at the time of writing on Sunday night. During the Fox Sports pre-game show, Jay Glazer reported that: “tonight will be the last game he plays at the Superdome. ... Drew Brees will be done. That’s it.”

It doesn’t quite feel right that Brees would go out this way. Three picks in a home playoff game, fewer than 150 yards passing, with a paltry completion percentage and an inability to drive the ball outside of the numbers. Age finally robbed Brees of the necessary skills that helped make him a beacon of efficiency, and allowed the Saints offense to subsist on craft and guile and intellect for over a decade.

You need some level of arm strength in order to maintain a diverse playbook and to stop the defence from clogging the middle of the field. The only time the Saints picked up any kind of spark was when Jameis Winston was drafted into the game for a trick play.

That left Sean Payton in a funky situation: bench Brees in what may be his final game and ride the Winston-coaster, or go down swinging with the guy who helped lift the franchise out of the horrors of Katrina and transform it from a footballing doormat into a serial contender? The former would have been the smart play, but Payton decided to roll with his heart.

This is how quarterbacks age. It’s always ugly. They whiff on throws down the field, they miss the rotating linebacker, throws that used to zip between gaps in the secondary start to hover. Rarely is the decline as smooth as, well, Brady’s. The end is thudding and final; quarterbacks are great and then they are bad.

Brady has carved out a tidy middle ground. He is no longer the player he was at the peak of his powers. But he remains the same old Brady who racked up titles during his final half-decade in New England, with only slight hints of erosion: still capable of streaks of greatness, prone to some errors, filled with a confidence in his arm that it no longer deserves, and capable of solving any defensive look if he sees it often enough.

Brady was far from perfect on Sunday night, but there was at least a winning formula for the Bucs, one that they will carry into snowy Lambeau Field next week. Run the ball first, play perfect defence, and bet on Brady to deliver on third-down, that was Bruce Arians’ masterplan, ripped straight from the early 2000s playoff manual. It worked – to an extent. The Bucs ground out the victory, thanks to a feisty defensive display, but Brady left plenty of opportunities on the field.

On Sunday, time decided football was finally over for Brees. Not for Tom. For now, Tom keeps winning. - Guardian