Spaniard is the underdog against Alexander Zverev in the semi-finals 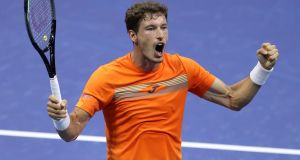 Spain’s Pablo Carreño Busta celebrates his victory over Canada’s Denis Shapovalov in the quarter-finals of the US Open. Photograph: Matthew Stockman/Getty Images

From day one, the 2020 US Open has delivered tales of the unexpected. And none surprised more than the expulsion of the world No 1, Novak Djokovic, which ushered Pablo Carreño Busta into the quarter-finals, where he made the most of his gift by beating the young Canadian Denis Shapovalov.

So, against all expectations, the 29-year-old Spaniard is staring at an unlikely hat-trick of upsets when he plays Alexander Zverev on Friday for a place in Sunday’s final, against last year’s finalist, Daniil Medvedev, or the triple-Slam runner-up Dominic Thiem.

Probably not even Carreño Busta’s closest friends would have predicted this scenario at the start of the tournament, as he is one of the game’s quiet survivors, with a history of serial ups and downs. Brought up on clay but suited to playing big from the back of a hardcourt when inclined (and allergic to the grass of Wimbledon), he reached a peak in 2017 when he broke into the top 10 after getting to the third round at the Australian Open, the quarter-finals at Roland Garros, nowhere at the All England Club and the semi-finals at the US Open.

At Flushing Meadows that summer, in far more fevered surroundings than the past few weeks, he did not drop a set against Cam Norrie, Nicolas Mahut, Shapovalov or Diego Schwartzman before Kevin Anderson beat him in four close sets. That effort left the South African running on empty against Rafael Nadal in the final – but this was where Carreño Busta belonged three years ago.

Yet two years before, in the obscurity of a semi-final at a low-rent event in Morocco, Carreño Busta’s game deserted him completely in 55 minutes, when he lost 6-1, 6-1 to the the world No 388, a Polish teenager called Kamil Majchrzak, who played what surely was the match of his life.

It can be misleading to trace the fortunes of opponents across the seasons, but it was interesting to see Majchrzak, who reached a career-high 83 in the world late last year, took a set off Norrie in the first round of qualifying for the Cincinnati Open two weeks ago, indicating there was potential there in 2015.

In this Slam, Majchrzak was scheduled to play Benoît Paire in the first round before the Frenchman was excluded after testing positive for coronavirus, and the Pole, now 108 in the world, lost to the alternate, Ernesto Escobedo, in three competitive sets.

But which Carreño Busta will turn up against Zverev: the bewildered loser of Morocco 2015 or the exhilarating outsider who lit up New York 2017?

Recent evidence suggests he will bring his best. Seeded 20 from his ATP ranking of 30 after late withdrawals, he has worked his way methodically through the draw after an admittedly wretched start against the unseeded Japanese world No 88, Yasutaka Uchiyama, losing 19 games in his three following matches – the last five of those arrived before the now infamous meltdown by Djokovic, where Carreño Busta bid him farewell after the Serb sent a spare ball spinning into the throat of an innocent official at the back of the court.

All that being said, Zverev will start a warm favourite. Only Shapovalov with 94 has struck more than the German’s 92 aces and Zverev has hit a third-fastest serve of 140mph in New York. Unfortunately, his serving arm remains as inconsistent as ever and 41 double faults in five matches, the most in the tournament, will cause him concern.

Carreño Busta, who figures in none of the top 20 in any of these categories, brings a game of few intimidating threats – or worrying weaknesses. Nevertheless, he will do well to stretch Zverev to four sets.

The other finalist is tougher to pick. Medvedev has so many obvious strengths on this surface, he would appeal as favourite, yet Thiem is a renowned big-match player, perhaps the toughest on Tour. In the only Slam decided this season, he pushed Djokovic all the way in Melbourne. His game is built on strength and resilience and it would be a surprise if Medvedev overwhelmed him.

But the Russian loves this tournament, albeit one without fans this time. His exuberance and unpredictability make him dangerous. While he could outlast Thiem, he may not have enough left against Zverev on Sunday. – Guardian