Out of Bounds: European Tour hopefuls prepare for the fury of hell 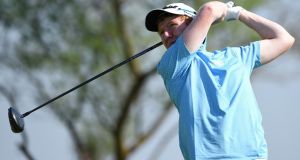 Gavin Moynihan is one of four Irish players bidding to secure their European Tour card in Spain. Photograph: Tom Dulat/Getty

It has been described as akin to “a torture chamber” by those players forced to endure six days of the PGA European Tour’s qualifying school, although it might be better to take it a few steps beyond that and compare the whole process with suffering all the fury of hell.

Is it fair on players? Perhaps more pertinently, is it relevant any more? Has the time come for it to be scrapped?

By a strange - or maybe devious - quirk of fate, this year’s European Tour Final Qualifying school starts this coming Saturday at Lumine Golf Club in Tarragona, Spain, where competing players will battle it out over six rounds to secure one of the 30 cards up for grabs. At the same time, the European Tour’s elite are involved in the business end of the Race to Dubai where a combined €13.5 million in prizemoney is on offer in the Nedbank Challenge and the DP World Tour.

Maybe the overlapping serves as an inducement of the riches that can be had by those who make it out of Q-School. Maybe.

For those players involved in the cut-and-thrust of the Q-School and that scrap for precious tour cards, these upcoming six days will be among the most stressful of their careers. Every drive, every approach shot, every recovery and every putt is part of a multiplier effect that will determine whether or not those with the strongest mental games and a swing that doesn’t desert them in their time of need earn a full tour card.

There are four Irish players involved in the process - Gavin Moynihan, Cormac Sharvin, Dermot McElroy and Ruaidhrí McGee - and, of course, everyone involved in Irish golf will hope - and even pray - that they do well and walk away with those precious tickets to the big circus. The simple fact is we need more players on the main tour.

But maybe there is another, better way, to find who should make it. The PGA Tour scrapped its Q-School a number of years ago in favour of giving tour cards to those who come through the Web.Com Tour and there is increasing evidence on this side of the Atlantic that those who served time on the secondary circuit - in this case the Challenge Tour - have better chances of making an impact in the long term.

Indeed, this season serves as a case in point. Of the 30 players who walked from Q-School with tour cards for the 2017 season just finished, only two of them - Eddie Pepperell and Edoardo Molinari - managed to retain them when the cut off point came at the recent Andalucia Valderrama Masters.

Perhaps the time has come to use that Challenge Tour as the route - in a similar way to the Web.Com Tour stateside - as the primary one for claiming tour cards; with a different qualifying school taking place to give players access to the Challenge Tour, where they will have the chance to become more battle hardened.

Time for a radical overhaul? Just a thought!