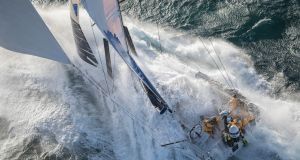 The Turn the Tide on Plastic boat is hit by a wave at the start of leg two of the Volvo Ocean Race from Lisbon to Cape Town. Photo: Ainhoa Sanchez/Volvo Ocean Race

Did I mention previously that racing on these Volvo Ocean Race 65-footers is like being drenched in a constant fire-hose?

Well forget that. It’s much worse.

Since leaving Lisbon at the start of this massive 6,500 nautical-mile stage to Cape Town on Sunday afternoon, simply standing on deck is like ducking under a waterfall non-stop.

Except this waterfall is coming straight at you, rather than from above.

We’re constantly surfing along at speeds well over 20 knots and the near gale force winds coming from behind us means we’re at our fastest point of sail. This speed-machine is simply soaking up the ocean in big seas as we move deeper and deeper into the mid-Atlantic.

On my first night-watch at this relentless pace, I was wiped-out four times, blown backwards off my feet despite being on the winch grinder that is usually a firm handhold against the breaking seas.

If not for my harness, I could easily have been swept overboard on any of these occasions. I clip on (to the lifelines) every time I go on deck. We all do.

Bianca (Cook–NZL) even took one wave that completely immersed her and caused her lifejacket to auto-inflate.

I didn’t feel fantastic for the first 24 hours but I think I managed it pretty well. I took anti-seasickness tablets every few hours and had one of those patches behind my ears so it’s okay.

But still our Turn the Tide On Plastic team maintains the pace, shaking off the excess water and picking up speed within seconds of each immersion that is happening every minute or two.

Still, while it was pretty awesome leaving Lisbon in that much breeze, quite quickly you’re just wet all the time and that’s hard living on a boat.

Probably the hardest thing is that it takes a full 15 minutes to pull on all the protective gear with neck and wrist seals, boots, lifejacket, harness and safety bum-bag – usually this is when there is a call to the offwatch to get on deck fast for a manoeuvre so the pressure is on to be quick.

I’m just trying to do my jobs as well as I can, stand my watches and get in as much sleep as possible to have enough energy as it’s pretty tough.

Thankfully, the strong breeze has eased off as we sail steadily southwards though it’s still very wet on deck and everything inside and outside is soaked. Sleeping with a saturated pillow the whole time is pretty hard!

As far as the racing goes, I’m not really watching it too much and we’re all just focused on sailing the boat as fast as possible; most of the time I don’t even know where we are!

We can see Scallywag (Skipper David Witt) a few miles away to the south and it’s nice to have another boat nearby all the way out here. Other boats are further west so we’ll just have to see how it plays out as we’re stretched across a 50 nautical-mile line with all seven boats in the fleet getting ready for the most important tactical call of the leg.

We’re making massive ground in these ideal conditions so we’ll reach the doldrums close to the equator really quickly, within a few days.

The big question is where to cross this zone of little or no wind so the navigators will all be finalising their plans over the next 24 hours. This big wind will finally run out and I can’t wait! (Though probably when it happens I’ll be complaining about how hot it is but for the moment I’m pretty excited to be a little bit drier and not so cold).

There’s still so much left in this leg, just over 4,000 nautical miles and once we’re into the South Atlantic the game will start to unfold for the second half of the leg to South Africa.

It looks like we’re about to gybe soon so I’d better go. We have sails and equipment to move across the boat which normally weigh up to two tonnes and that’s before counting the water that’s accumulated in the sailbags.