The countryside is beautiful, rich in culture and heritage, and Menteith brags an almost guarantee of big fish 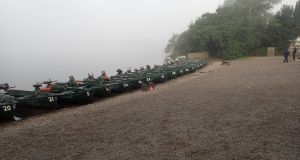 The fleet of boats on Menteith awaiting the daily influx of anglers. Photograph: George Barron 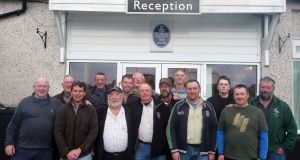 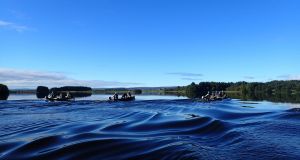 Heading out for a day’s fishing on Lake Menteith. Photograph: George Barron 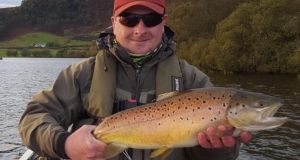 Boobies were to the forefront during my fishing trip to Lake Menteith in Scotland as I strove to overcome the high energy levels of these super-fit rainbow trout. Their fighting prowess challenged even the most experienced anglers.

As part of a group of 16 anglers, this was my second visit to Scotland and the four-day fishing experience was to prove an added bonus. An early morning start from Dublin allowed plenty of time to catch the Stena Line sailing from Belfast to Cairnryan.

On to the once-popular commercial fishing port of Girvan in Ayrshire, where today the harbour is popular for angling and leisure trips; and the market town of Maybole, famed for its close links to the poet Robbie Burns.

The coastal journey towards Sterlingshire brought some stunning scenery. Ailsa Craig, a volcanic island some 10 miles offshore in the Firth of Clyde is renowned for its water-resistant microgranite for making Olympic-standard curling stones.

On leaving each town, the eye-catching “Haste Ye Back” sign spoke volumes for Scotland and its townspeople!

A stop-off at Glasgow Angling Centre for last-minute tackle requirements in this magnificent megastore and then it was onward to Aberfoyle and the Rob Roy Hotel, our base for the next five days. Further on lies Loch Lomond and the road to the scenic wonderland of the Highlands.

Situated on the outskirts of the town, the hotel opened in the 1940s and is modelled on the American-style roadside restaurant and motel. During the second World War it was requisitioned by the War Office to accommodate prisoners-of-war.

Up until 1959, the Glasgow-bound train stopped at the Rob Roy, however the railway track is now transformed into a splendid walkway to nearby Aberfoyle.

Today the hotel, while maintaining its motel ambience, has undergone major refurbishment and now boasts 103 rooms, all en-suite and each fitted out with the mod cons necessary for today’s clientele.

Lake Menteith beckoned and I couldn’t wait to get going with the fishing. Wild and wonderful, full of character and wildlife and, hopefully, plenty of those “big ones”. I was impressed.

Surrounding landowners secured the fishing rights of the lake in 1966 and with fish farm attached, developed Menteith into one of the most successful put-and-take fisheries in Europe.

There are 34 boats, each equipped with 4hp outboards, and all ready for our 9.30am start each morning thanks to the two lake stalwarts in Douglas Fraser and Quint Glen. These two gentlemen have amassed 50 years dedicated cap-in-hand service to the daily influx of anglers.

“The 700-acre lake, shaped like a figure eight with a narrow bit in the middle, holds a large stock of rainbows, browns and blues, and also pike, perch, bream, tench and dace,” Quint said.

Overconfident, I thought this was going to be easy. After all, I had caught quite a few trout in my time. How wrong I was.

I tried several different casts with the standard Montanas, Humungous and Cats Whiskers lures, and with a fast retrieve, caught absolutely nothing. Yet, I could see rod-benders in boats close by. Frustration began to set it!

However, local knowledge is all important. With ear to the ground, I soon realised my mistakes. “Try a floating line with slow retrieve and a small Boobie on the point and two Cormorants. Interchange with Blobs and Diawl Bachs and you will be okay,” Douglas said.

Next day I caught four beauties, two over 3kg. They fought like tigers, stripping line at the rate of knots, battles which lasted all of 10 minutes. These big fish had all the fighting qualities I had ever experienced with salmon.

This trend continued for the next two days and I went on to claim 10 terrific fish and lost as many in the process. Conservation was to the forefront with our group and all fish caught were released unharmed.

After a hard day’s fishing it was delightful to tuck into a four-course dinner. A typical menu consisted of salmon terrine and tiger prawn salad followed by roast topside of Scotch Beef with all the trimmings.

My time in Scotland was complete. The country is beautiful, rich in culture and heritage, and Menteith brags an almost guarantee of big fish. My deposit is already paid for a return next year!

Visitors have the opportunity to see some of the finest fly dressers practise their art, while champion fly casters will demonstrate casting techniques and fishing tactics.

The tackle trade will be represented with a range of trade stands, and Mark Bowler, editor of Fly Fishing & Fly Tying, will launch his new book Manual of Fly Fishing.

Experts from Inland Fisheries Ireland, Tom “Doc” Sullivan and Dr Ken Whelan will host talks on angling related topics and the youth fly tying competition will give juniors a chance to show their skills.