Opportunities fading for Dan Martin after the Vuelta’s cruellest day 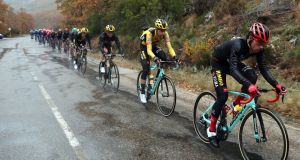 Race leader Primoz Roglic in action during stage 15 of the Vuelta a España, the 230.8km run from from Mos to Puebla de Sanabria. Photograph: Kiko Huesca/EPA

The opportunities came and went as they do across the longest and cruellest of stages and still there was nothing lost or gained at the front of the race, only the fading prospect it seems of Dan Martin regaining his podium place in the Vuelta a España.

Stage 15 started out from Mos just over the border with Portugal shortly after breakfast and reached Puebla de Sanabria not long before dinner, the 145 riders left in the race at times looking uncomfortably numb, in and out of the saddle for well over six hours, having faced into 231km of repeatedly undulating road, intermittently cold rain and a constant headwind.

It was the longest stage of any Grand Tour or indeed stage race this season, and the first in a long while to finish in such wintry conditions. In skirting the northern border with Portugal they also took in five categorised climbs, more or less halfway up Mount Everest in total metres gained, and finished on the downhill stretch off Alto de Padornelo just as the rain was turning torrential. No wonder most riders looked happy just to make it, Martin included.

No wonder too the organisers agreed to neutralise the race with 3km to go, meaning the general classification timings would be taken at that mark, rather than at the finish itself. It made for a strangely muted bunch sprint won by the young Belgian Jasper Philippsen, the 22-year-old from UAE Team Emirates proving the hardiest man on the day, his first Grand Tour stage victory, having finished second to Sam Bennett back on stage 4.

For Bennett and plenty others the stage was about survival. Indeed it proved to be a particularly long day in and out of the saddle for the Irish rider, who drifted off the back of the peloton on the tortuously long drag towards the Alto de Padornelo, with 37.7km to go, the stage still yet to reach its highest point of 1,340m.

He wasn’t alone in his moment of suffering: riders could be seen swinging their arms trying to warm-up at that point, stage 15 winner Tim Wellens of Lotto Soudal knocking his effort of the day on the head despite being part of the breakaway.

For Bennett then the race to Puebla de Sanabria was all about staying within the time limit of the day, the 12 per cent allowing for 45 minutes and 55 seconds, which he comfortably did, the last rider across the line, 18:27 in arrears, for now still in the race for that final sprint into Madrid.

With the breakaway of 11 riders all reigned in with just under 3.5km to race, including Bennett’s team-mate Mattia Cattaneo at Deceuninck-Quick Step, the last one riding solo for the win, all the top GC riders were therefore given the same time as Philippsen, who spent six hours, 22 minutes and 36 seconds in and out of the saddle, to be exact.

Primoz Roglic finished 49th on the day, and with that the defending champion from Slovenia continues to lead second-placed Richard Carapaz by 39 seconds, with the strong team of Jumbo-Visma still behind him, while Britain’s Hugh Carthy remains 55 seconds clear of Martin, the Irish rider placing 56th on the day.

“A hard day, I’m really happy it’s behind us,” said Roglic, as well he might. With only three stages left to ride, including the customary procession into Madrid on Sunday, Martin may well be counting on the last of whatever opportunities come on Saturday’s penultimate stage, the 178.2km from Sequero to La Covatilla, which features five intermediate climbs before finishing at the ski station.

That stage will likely present Martin’s last proper chance to regain the third-place podium position he’d held from the opening stage, only to lose it to Carthy after the British rider won the stage finish on the Angliru – although Friday’s Stage 16 from Salamanca to Ciudad Rodrigo, 162km in all, is far from straightforward.

“All those endless kms, all the misery in the wind, rain, fog, and low temperatures, all the discomfort and pain, resulted in a GC status quo. At least everyone’s safe,” said Martin’s team Israel Start-Up Nation.

It’s a rare thing for all three Grand Tours of cycling this season to have been so relatively close with only three stages to go, only unlike the Tour de France and the Giro d’Italia, the Vuelta has already had its time-trial, leaving Martin, Carapaz and Carthy all seeking a different sort of opportunity to take back the time on Roglic. It will likely be at La Covatilla or nowhere.