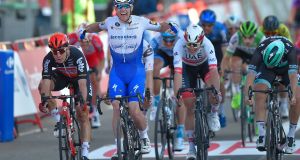 Sam Bennett’s elation at winning stage 9 of the Vuelta a España was short lived as he was disqualified. Photograph: Ander Gillenea/AFP via Getty Images

Everyone has their own definition of a rest day. In Grand Tour cycling it means keeping the wheels and legs in spin ahead of what’s to come and Monday’s day off at the Vuelta a España got hearts racing in other ways too.

Because for the first time since anyone can remember another Grand Tour route was presented while this one was still going on, the 21 stages for next summer’s Tour de France unveiled on French television on Sunday night, and the main subject of conversation among the riders still left in the Vuelta, with six stages remaining before Sunday’s finish in Madrid.

For Dan Martin and Sam Bennett – the former still chasing a podium place, the latter another stage win – there was some licking of lips and rubbing of hands, next year’s Tour route widely greeted as having something for everyone in the peloton.

After winning two stages outright this year, finishing six times in the top five, and bridging the 31-year gap since Seán Kelly was the last Irish rider to win the green jersey, Bennett can look forward to eight evenly spread flat stages in the 108th Tour, which gets underway in Brittany on June 26th and finishes in Paris on July 18th, a week earlier than usual, given the Tokyo Olympics are for now at least still set to open the following Friday, July 23rd.

“I haven’t got a real chance to look at the route yet, but from what I’ve heard eight to nine sprints, which is lot more opportunities than I’ve had in the last three Grand Tours I’ve done,” Bennett told The Irish Times on the second rest day in the Galician coastal town of Muros. “So that’s fantastic, can’t wait, having more sprints as a sprinter, that’s what we want.”

Bennett has already claimed one win in this Vuelta, on stage 4, looked to have won another on stage 9, only to be relegated for an “irregular sprint”, the Deceuninck-Quick-Step rider suggesting his recovery that day didn’t go ideally, as he contested the decision of the race jury.

“To be honest, I’ve found the beginning of the second week the hardest. The second time I crossed the line first I didn’t have good legs, then obviously the day after, the legs were gone. So a tough second week in all, but in general nothing too major.

“Six days to go now, I feel quite okay now, the last two days in the mountains weren’t so bad, [Michael] Morkov helped me use the time limit very well, and I got through Sunday quite easy. It really does feel like the end of the season, but I’m definitely still motivated for the next few days.

“And yeah looking for another opportunity, hopefully we have one or two this week, we’ll definitely be trying to get across the line first for a third time in the race, maybe a fourth as well.

“It’s a strange one, because I felt I had the conditioning here, just not the freshness, also the aspect of the mental freshness, because it’s been such a strange year, a very long year. So to go into another one [Grand Tour] has been difficult, but that’s what we like to do, and overall it hasn’t been quite as hard here as the Tour, still very difficult, and I can definitely feel it’s my second Grand Tour this season, learning a lot from it.”

Postponed for a full two months this year because of Covid-19, the 2021 Tour will be marginally shorter at 3,383km and not quite as mountainous, although stage 11 already stands out in every sense, the riders scaling Mont Ventoux, the giant of Provence, not once but twice.

Both Irish riders have plenty of other things to occupy their mind before Madrid: Sunday’s stage 12 finish on the Angliru saw Martin drop out of the top three for the first time since the race began, although he’s just three seconds behind Britain’s Hugh Carthy, 25 seconds behind defending champion Primoz Roglic, who in turn is just 10 seconds off race leader Richard Carapaz.

Tuesday’s 33.5km time-trial from Muros to the steep peak at Mirador de Ézaro has the potential for losses and gains, especially with rain forecast, even if only the last 1.8km is properly uphill.