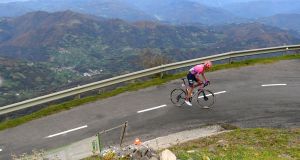 Hugh Carthy on his way to winning Stage 12 of the Vuelta a Espana. Photo: David Ramos/Getty Images

There is no hiding on the Angliru. Dan Martin said it before the start of Stage 12 and so it proved at the finish, the tortuously high mountain pass closing out the second week of the Vuelta a España and gently shaking up its likely outcome in the process.

Martin rode to his absolute limit and then somewhere beyond to retain his podium position and in the end it just wasn’t enough, Britain’s Hugh Carthy taking his first ever Grand Tour stage victory on the near mile high peak in the Asturian mountains and, with that, moving ahead of Martin into third place overall, the Irish rider now sitting just three seconds back in fourth.

For the third successive stage Martin finished in seventh, and there were other minor losses and gains at the front of the race, Richard Carapaz taking over the leader’s red jersey thanks to his fourth place finish, Primoz Roglic finishing fifth but 10 seconds back, which is now the margin between the two.

“It was a super hard day again,” said Martin. “Every climb was ridden really quickly but I felt good. Angliru is more of a time trial than a race. You just push the pedals as hard as you can and in the top you see the result. I felt good until the steeper sections near the top but just didn’t have the strength to push the pedals any harder.

“When Enric Mas attacked I knew the hardest sections were coming up so it was important to not go into the red and just ride at my speed.

“It’s another strong performance though and it’s just important to still be there fighting. You can see the best guys are all very close so every second counts. I did my best so we have to be happy today. If you told us at the start that on the second rest day we would be 35 seconds from the lead we would have taken it for sure. Now hope to have a relaxing day tomorrow and recovery to do a good time trial Tuesday.”

With his 10-second stage winning bonus, Carthy is now 32 seconds behind in third, the EF Pro Cycling rider unquestionably the strongest on the day, breaking off the front with 1.2km remaining of the Alto de l’Angliru, 12.5km in length, seemingly climbing up forever, scary and brutal and epic all in one.

Indeed Martin was already looking in some difficulty 3.3km from the top, the 34-year-old in and out of the saddle, shoulders rocking, and somehow got back in touch with Roglic, only once Carthy made his move there was simply no covering it. Martin also did the entire climb without any support from his Israel Start-Up Nation team.

“It’s a dream come true, to win any professional race, but to win in a Grand Tour on a mythical climb, it doesn’t get any better than that,” said Carthy, the 26-year-old from Preston once known in his early cycling days as the ‘Lancashire Long Shot’.

Roglic did have some support from Jumbo-Visma but the defending champion didn’t quite have the legs to stay with Carapaz, the Ineos Grenadiers rider from Ecuador starting the day with the same time as the Slovenian; Roglic will however wear the green jersey, which had been on loan to Martin for the day.

For many in the peloton, Stage 12 was all about survival. As expected, the gaps for many other riders were in minutes, substantial at that, Sam Bennett coming through again after Friday’s rough ride onto the Cantabrian Mountains in the north country with some question marks over his levels of fatigue, but he made it well within the time limit of 47:14, finishing 149th of the 151 finishers, 38;54 in arrears, again with his faithful Deceuninck-QuickStep teammate Michael Morkov for company.

For now at least Bennett looks perfectly intent on making the finish in Madrid on Sunday and pushing for another stage win.

With six stages remaining after Monday’s second rest day, including Tuesday’s 33.7km time trail where Roglic if fancied to take time on everyone, there is still plenty to fight for, not least that podium position for Martin.

Carthy will fancy his chances of taking some more time out of Martin on the time trail, but there are still a couple more big mountain stages to come where Martin can try his luck, especially next Saturday’s penultimate 178.2km stage from Sequero to La Covatilla which features five intermediate climbs before finishing at the ski station.

This stage was a more punchy 109.4km in all, four climbs on the way as a warm-up before the Angliru, a sort of Alp d’Huez in the northern countryside of Spain, which has an uphill gradient of 23 per cent in parts and promptly had the leading riders strung out like beads on a string.

Enric Mas of Movistar took third on the day, the Spanish rider now sits fifth overall, but one minute and 10 seconds behind Martin, the only other rider, for now, in contention for a podium place. There were some big losses, Marc Soler of team Movistar dropping from sixth to 19th after losing over 14 minutes on the final climb.