Dates set for proposed return to play and training protocols 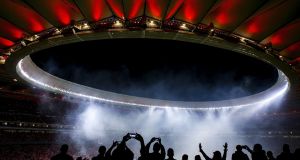 Spain is preparing a protocol for clubs’ return to training with three proposed dates for La Liga to restart: May 28th, June 6th and June 28th. Matches are expected to be played behind closed doors and European games would take place in parallel or at the end of the domestic season.

The plans were revealed on Tuesday by the president of La Liga, Javier Tebas, who said the possibility of annulling the season was not being considered by Europe’s major leagues. He added there were no plans for Spain’s top-division clubs to play away from their stadiums but that some could be forced to do so because of scheduled building work.

La Liga is aware it remains in the hands of the health authorities and a lockdown will be in force until April 26th at the earliest. But Tebas, who is in near daily contact with Uefa, the European Club Association and heads of European leagues, is confident the season can be completed by August. “The studies are ongoing and I feel assured that both [European and domestic] competitions will be completed,” he said.

Tebas claimed La Liga had lost 25 per cent of its annual income in two months and that the cost of not renewing the season would be €1 billion. In the event of returning but behind closed doors La Liga calculates losses closer to €300 million. Tebas continues to press for wage cuts but insisted that Spanish football would not seek state aid. He said the league would impress upon the government the need to return to action, even without fans.

Asked whether the possibility of annulling the season was being considered and what would happen to the title, European positions and the relegation zone, Tebas replied: “It is only something that I would contemplate if I was asleep; if I am awake, not at all. We are not considering that; it is something that will be studied only at the point at which it absolutely has to be. I do not wish to start the debate now because it is pointless and only generates a conflict of interest.

“None of the big or medium leagues are considering terminating the season. Not returning is not an option we are thinking about at all.” He added that it “should not be so difficult” to find a collective solution to extend players’ contracts beyond June 30th.

“A protocol is being drafted by three medical teams over the last two weeks for a return to training which involves the possibility of doing coronavirus tests and isolation in dressingrooms. When? We can’t say at the moment. The Spanish medical authorities will tell us. There is a state of alarm until 26 April and we will not start training until that point at the very earliest. The most probable options at the moment for matches returning are 28-29 May, 6-7 June and 28-29 June.

“We will look at other scenarios as they occur, especially when we see what happens in April. We think we can finish in August; we think that’s viable. Uefa made a big effort to enable us to optimise the dates.

“The last business that will return to normal are theatres, cinemas, shows that people attend. We are an industry like that too but we can also restart part of our activity without people because the fundamental part of our income comes from TV. So, it’s not a case of us getting special treatment; it’s that when we return, we will be able to do so in a way that allows us to exploit part of our business.

“I think that’s our obligation and the obligation of the government too as we’re talking about an industry that accounts for 1.37 per cent of GDP and which directly and indirectly creates 180,000 jobs. We shouldn’t just look at this as players and teams; this is an industry.” – Guardian