Nicolas Roche fails to make progress at Vuelta a España 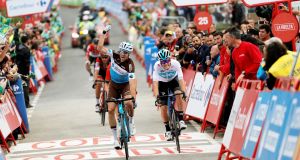 Nicolas Roche slipped three places to 34th overall in the Vuelta a España on Thursday, losing time to a large breakaway which stayed clear until the end of the stage. Frenchman Alexandre Geniez (AG2R La Mondiale) beat Dylan van Baarle (Team Sky) and several others to the line in Faro de Estaca de Bares in Mañón; Roche rolled in as part of the main bunch 11 minutes 39 seconds back.

One of the breakaway riders, Jesús Herrada (Cofidis) takes over at the top of the general classification. Roche is 17 minutes 5 seconds back.

Stage one winner Nina Kessler (Team NH) was involved in a large crash with 10km left. She finished in the main bunch, but the superior consistency of Iris Sachet (DN17 Nouvelle Aquitaine) over the two days saw her take over the leader’s jersey. She is on the same time as 54 others, setting up a major battle for Friday’s stage to the top of Mount Leinster. Creamer is top Irish rider in 13th.

At the Tour of Britain, the Team Wiggins squad of Mark Downey and Matthew Teggart finished 13th in the team time trial. Teggart lost time to his team-mates, but Downey finished with them, dropping one minute 25 seconds to the victorious LottoNL-Jumbo team.

Contrasting reactions from Wozniacki and Williams to Melbourne exits 17:22
Matt Williams: Expect the unexpected in rugby’s greatest tournament 16:00
NFL Division One: Malachy Clerkin’s team-by-team guide 16:00
Kellie Harrington one fight away from gold in Bulgaria 15:52
Eddie Pepperell sets the halfway pace in Dubai Desert Classic 15:22
Here is your handy guide to sport on television this week