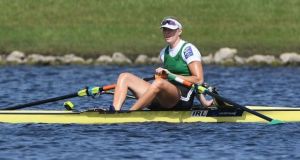 Sanita Puspure sweeps into the Championships on a wave of good will and will be seeking a medal. Photograph: Inpho

The World Rowing Championships, which start in blazing-hot Plovdiv in Bulgaria on Sunday, will answer two big questions: can Sanita Puspure get the medal she craves; and will Paul and Gary O’Donovan shine in the lightweight double in a packed field?

Beyond these, maybe the most interesting consideration: is there depth in the Ireland team which can see it move beyond these two crews when they go?

Puspure sweeps into the Championships on a wave of good will. A decade of striving in Ireland colours through three different regimes, a few huge disappointments (not least in the Rio Olympics where she did not even make the final), and a record of falling ill at the wrong time.

The year 2018 has been different for this single sculler. At 36 she has thrown herself into the hard programme of training set by high performance director Antonio Maurogiovanni. Always prone to wanting to tick every box in preparation, this season she chose to miss the European Championships. And she has – finally – been placing herself where her strength and speed can put her. She competed at two World Cup Regattas and took silver in both. In Lucerne in July she was just .23 seconds off the gold won by Jeannine Gmelin.

Any position is possible: a medal is what she deserves. And it could be any medal.

As the one lightweight event left in the Olympic programme, the lightweight double is “tighter now than it ever was”, according to Gary O’Donovan. It is a justified statement. Ireland won at Lucerne. But Poland and Italy took gold in the first and second World Cups, and Norway bested Ireland at the European Championships last month, pushing them into second. After a good camp in Spain, the O’Donovans will be determined to reverse that.

The brothers from Skibbereen have had a year of engaging with the wider world. Right at the start they spent time living and competing in New Zealand and Australia, while just this week Paul started graduate-entry medicine at UCC. He will balance study in this with his rowing in 2019, with more emphasis on rowing in the Olympic year of 2020.

Looking beyond this point is not on the mind of the brothers, according to Gary. “We’ll throw the spanner at it these years. You never know what will happen to the lightweight double after Tokyo. ”

The International Olympic Committee has made no secret of their aim of removing lightweight rowing from its programme, and it is contracting. For Plovdiv, three lightweight pairs entered and just two may compete.

Mark O’Donovan and Shane O’Driscoll, the reigning champions in that class, will represent Ireland in the Olympic-class heavyweight pair. A good placing in the B Final would make the case that they should continue in this boat next year, when a spot in the top nine at the World Championships should qualify the boat for the Olympics.

Positioning themselves in the picture for Olympic-qualification next year is also on the mind of four of the other Ireland crews. The Ireland women’s pair of Emily Hegarty and Aifric Keogh and the men’s and women’s doubles of Ronan Byrne and Philip Doyle and Monika Dukarska and Aileen Crowley are in tough classes. The women’s lightweight double of Aoife Casey and Denise Walsh are perhaps best placed, as they showed good form at the European Championships, where they finished eighth.

The lightweight men’s quad is a young crew which may climb well up the rankings in a field of 11.

Patrick Boomer, an ambitious heavyweight who can consider himself unlucky to not be heading for Plovdiv, is a surprise entry at the Irish Offshore Championships in Kerry on Saturday. The big man has been training in Donegal. He is looking forward to competing and, if he is successful, going on to the World Coastal Championships in Canada in October. Though he will study at Queen’s University, he plans to continue to be part of the Ireland programme run-out of Cork.

Double Olympian Paul Griffin, who has just turned 39, will also compete at the Offshore Championships, which will be held at O’Carroll’s Cove near Caherdaniel.