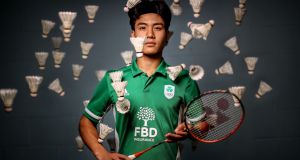 When he followed his father, Lai, and sister, Thammy, to Ireland from Vietnam he was six years old. Nhat Nguyen was moving his feet fast young in life. Until Covid threw a large, heavy blanket over the world of sport, that early forward momentum that his family had shown in seeking a better life had not slowed.

From the countryside two hours outside Hanoi to a couple of years living in Cavan and then finally to Dublin, the local GAA club Rory O’Moores wasn’t for Nhat. But it was there in a community hall in Belturbet that the 20-year-old first felt the magnetic swish of a badminton racquet.

Two years ago that partnership led Nhat to the Under-17 European Championship gold medal. Now also a three-time national champion, this week was supposed to be another rise, a further staging post in a blossoming career.

This week and last he should have been in the Athlete’s Village in Tokyo. Instead he has been helping with deliveries in his mother’s Chinese takeaway in Clare Hall and doing the best he could during lockdown in his sister’s gym.

“I think a couple of workers were scared so I had to help my parents out,” he says of the virus. “I’m really glad I did, to understand. It was like a new way of life. It definitely made me feel more appreciative and humble to see how hard they work for me to let me travel around the world. So, yeah, I’m a lot more grateful.”

At home Nhat speaks Vietnamese with his family. There isn’t a Cavan ‘yoke’ or ‘yon’ in his accent. It’s Dublin all in. His ambitions, they are Irish and he hopes, beyond. Still, three years ago as a curious teenager he hardened the connection with the country where he was born and travelled to Hanoi, his first time back since leaving as a toddler.

“Our uncle came over first to Ireland and then my dad followed my uncle,” he says. “Originally my dad and my sister came over and then we had to sort out papers to bring my mam and myself over. So that took a couple of years. Just to get a better life really.

“I was six years old. I was a little bit too young to remember but I did go back a couple of years ago. Everything was different to what was in my memory. We came from the countryside of Hanoi, maybe two or three hours away from the city.

“Not the best living environment. I’m happy we got out of there. Going back to where I came from it was hard to see . . . it is a hard life. We were the lucky ones to leave and to get a good life somewhere else.”

He hadn’t been back to Vietnam since he left in 2006. Inquisitive, all he wanted from the trip was a little context to his life in Dublin, to see family and to understand where he had come from and where he grew up for the first six years.

“At the stage that I was kind of curious,” he says. “All right let’s go back, let’s see. It was definitely a good experience. Your roots, it’s good to know where you come from.”

Closer to what took place in Vietnam, his parents talk about the war that ripped the country apart. His great grandfather, he thinks, was part of the conflict, which drew in the USA, Vietnam, Laos, and Cambodia from 1955 to the fall of Saigon in 1975. But he’s as pleased to stay away from the politics of the past.

A young ambitious head his focus is on where he is going. He caught a glimpse of that four years ago when he looked on with the rest of the Irish badminton world as Scott Evans became the first Irishman to win a match at the Olympics with a win over Germany’s Marc Zwiebler in Rio. The shirt came off and Evans created news. Who was this shirt-ripping badminton player?

Evans followed that by crushing local hopes and Brazil’s Ygor Coelho de Oliveira for a top-16 place before going out to Denmark’s Viktor Axelsen, the 2016 bronze medal winner and 2017 world champion.

“I think you have to set goals, even in the biggest sporting event for badminton,” says Nhat, who was speaking in his role as an FBD brand ambassador. “So going to the Olympics you have to set a goal. My goal would be to emulate what Scott did four years ago. He made it out of his group stage. He beat a seed. He made it to the last 16.

Leaving the takeaway deliveries at customer’s doors and scarpering has taught him about the humdrum of ordinary work, a counterpoint to living his sporting dream life. Before movement froze he was travelling to 20-plus tournaments, including playing club matches.

That sometimes meant two or three months in a row, a grind but loving it. Back in high performance since June, it is now repetitive, groundwork, sessions. Hard ones, easy ones, reps and sets and working on weakness and being stronger in strengths.

He’s in active storage but already the September schedule, originally revised by the World Badminton Federation, has been cancelled and they are preparing for start backs in October, November, December or January.

“I had a goal of achieving top 50 by the end of this year. I was on track for that to slowly get my ranking up to play the best tournaments in the world. That was the plan. My performances were getting better and better. I feel when I come back I can continue.”

Moving on, continuing. For Nhat that’s what it has always been.

1 Awarding of 2023 Rugby World Cup to France part of Laporte investigation
2 Suarez’ Italian language exam rigged according to prosecutors
3 Trump in the rough over playing golf and US Covid-19 fatalities
4 The Offload: Saracens prove Pro14 is not fit for purpose
5 What next for green jersey hero Sam Bennett after toughest of Tours?
Real news has value SUBSCRIBE

Donegal SFC final postponed until October 7th over coronavirus concerns 18:28
Trump in the rough over playing golf and US Covid-19 fatalities 18:12
Tottenham’s Carabao Cup tie at Leyton Orient off but no decision on walkover 17:45
Digital passport system could ensure horse movements if Brexit deal agreed 15:45
Awarding of 2023 Rugby World Cup to France part of Laporte investigation 16:12
Here is your handy guide to sport on television this week