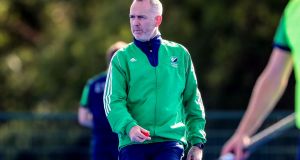 The Irish men’s hockey team hopes to have a new coach in place by the end of the year. Hockey Ireland (HI) advertised the top job on Tuesday seeking candidates to fill the role on a permanent basis.

Former Ireland international player Mark Tumilty had been appointed head coach ahead of the Tokyo Olympics qualifying series of matches against Canada in Vancouver last year. Two-time British Olympian Jason Lee was Tumilty’s assistant coach with Hockey Ireland at the time describing the appointments as “short-term”.

“Hockey Ireland is seeking to appoint a senior men’s full-time head coach to lead the Irish men’s hockey national team towards achieving its strategic objectives, namely to compete for medals at World and Olympic level tournaments,” said the HI post.

It added desirable criteria of a “proven record of success in international hockey, experience of world-class tournaments at the highest level (World Cup and Olympic level competition) in a coaching capacity” adding that the appointment would be expected to be made by December 2020.

Tumilty remained in charge of the men’s team throughout 2020, although HI indicated it would advertise the full-time head coach position after the conclusion of this Olympic cycle.

Ireland have had an unfortunate recent past with coaches for both the men’s and women’s teams and have struggled to hang on to them following periods of success.

In 2018, Craig Fulton stepped down to take up a position with Belgium. The South African-born Pembroke Wanderers player had been at the helm of the Ireland side since 2014 but moved on to the Belgians as an assistant.

Under Fulton’s watch, Ireland won a European bronze medal, qualified for the Rio Olympics and had qualified to play in the last World Cup in India.

In 2019 Alexander Cox, who replaced Fulton, resigned leaving the national side without a head coach just two months out from their make-or-break Olympic qualifier, which they then lost under Tumilty.

Women’s coach Graham Shaw also departed following his historic run to the World Cup final with the women’s national team in 2018. Then in March of the following year HI accepted his resignation as he took up the position of head coach of New Zealand’s senior international women, ‘The Blacksticks’, then ranked at six in the world. Shaw had long and strong ties to Irish hockey both as a senior international player and as part of the coaching set-up since 2010.

The contract role for the chosen candidate is through the Olympic cycle of 2024, with annual reviews.