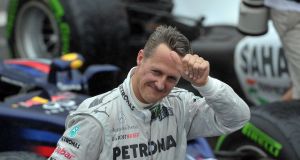 Michael Schumacher’s family issued a rare public statement around his medical condition on the eve of his 50th birthday, stating that they are “doing everything humanly possible” to help the seven-time Formula One world champion.

Schumacher turns 50 on January 3rd, but the most decorated star in F1 history has not been seen in public since he fell and hit his head in a skiing accident on the French Alps five years ago.

He is understood to be receiving medical care at the family home near Lake Geneva in Switzerland, but updates regarding his health have been few and far between.

The wall of secrecy, enforced at the request of his wife Corinna, was established to protect one of the biggest names in modern sporting times.

But the sporadic offerings about a driver who won a record seven world championships, 91 grands prix, and commanded a following of millions around the world, have led some to ponder whether more details should be made public.

The family seemingly obliged by releasing a statement on January 2nd, although any medical information was again kept from the public.

“You can be sure that he is in the very best of hands and that we are doing everything humanly possible to help him,” it read.

“Please understand if we are following Michael’s wishes and keeping such a sensitive subject as health, as it has always been, in privacy.

“At the same time we say thank you very much for your friendship and wish you a healthy and happy year 2019.”

Ross Brawn, one of only a handful of people to have visited the stricken driver, believes Schumacher’s family are right to conceal his medical condition.

Schumacher’s former manager, Willi Weber said in 2017: “I find it very unfortunate that Michael’s fans do not know about his health. Why are they not being told the truth?”

Yet Brawn, who helped mastermind Schumacher’s success at Benetton and Ferrari, and has visited the former champion in Switzerland, does not concur.

“I am constantly in touch with Corinna, and I totally agree with their decision,” he said.

“Michael has always been a very private person and that’s been a guiding principle in his career, his life and his family always agreed with that choice.

“It’s completely understandable that Corinna has wanted to maintain the same approach, even after the tragic event, and it’s a decision we must all respect. I’m sure the millions of people who are still Michael fans will understand it, too.”

On Thursday, Ferrari will celebrate the German’s birthday by launching a special exhibition at their Maranello headquarters in northern Italy.

The display, which runs in association with the Keep Fighting Foundation — of which Brawn and FIA president Jean Todt are both trustees — will honour Schumacher’s remarkable success with the Italian team.

Schumacher added to the two titles he won at Benetton with five triumphs for the Prancing Horse at the turn of the century, posting a series of records many viewed as untouchable.

But after surpassing Schumacher’s pole position tally in 2017, Lewis Hamilton is now only 18 wins and two championships away.

“Lewis is certainly capable of matching and surpassing Michael’s other records,” added Brawn, now acting as the head of motorsport for F1.

“There’s no doubt that Lewis and Michael are amazingly talented. In fact, it’s their natural talent that unites them. The way in which they achieved their wins is where they differ.

“Michael treated his driving career as though it was a mission to which he dedicated himself completely from the first to the last day. In some ways, Lewis has taken longer to find his way, and today it seems he has found that way more from outside the sport than from inside it.”

Remarkably, the Schumacher name could be back on the grid in 2020, with Ferrari and Mercedes both keeping tabs on Mick Schumacher.

Schumacher Jnr, the 19-year-old son of Michael, will compete in Formula Two this year after winning the F3 title in 2018.

“Carrying that name weighs heavily but Mick manages it with great care and intelligence,” said Brawn.

“Clearly, I’d hope to see him in F1 one day, but the important thing is to let Mick grow and find his own way without creating any unnecessary expectations.”