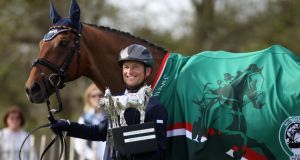 History was made at this year’s Mitsubishi Badminton horse trials when Michael Jung became the first German rider to win the four-star event which concluded on Sunday.

The reigning Olympic and European champion went into the lead at Thursday’s opening session of dressage when awarded a penalty score of 34.4 for his work with La Biosethique Sam and he finished on that mark, the lowest winning score ever at the Gloucestershire venue.

In addition to a cheque for £80,000, Jung (33) receives a bonus of €350,000 as only the second rider to win the Rolex Grand Slam of consecutive wins at Burghley last September, Kentucky the weekend before last and now Badminton. La Biostethique Sam, which has carried Jung to many of his biggest successes, is a 17-year-old German-bred gelding by the Irish thoroughbred Stan The Man.

Following the elimination on Saturday’s influential cross-country course of the then second-placed British combination of Emily King and Brookleigh, Jung’s closest challenger going into the final show jumping phase was his compatriot Andreas Ostholt, riding So Is Et, who left all the poles intact to complete on 43.4. Britain’s Gemma Tattersall finished third on her dressage score of 44.6 with Arctic Soul, a 13-year-old thoroughbred gelding by Luso which started his career here running in bumpers and over hurdles.

The best-placed Irish competitor, having climbed from 45th after dressage to ninth, was Camilla Speirs. The Co Kildare rider was on board on mother Bridget’s diminutive Portersize Just A Jiff, a 16-year-old gelding by the Connemara stallion Crosskeys Rebel. Speirs narrowly failed to get home clear within the time on Saturday but just picked up 0.8 of a time penalty before show jumping clear for a three-phase total of 50.7.

With no clears recorded in the first round, all nine of those on four faults competed over a shortened track with Twomey posting an unbeatable time of 49.96. Britain’s Nigel Coupe finished second (51.92) with the Irish Sport Horse Golvers Hill, a 13-year-old by Ricardo Z.

At home, Ger O’Neill won Sunday’s round of the Horseware/TRM national Grand Prix with Eamonn Murphy’s eight-year-old Indoctro stallion Dondoctro Ryal K, a horse the rider has produced for the past five years.