McGregor v Mayweather: All of your questions answered 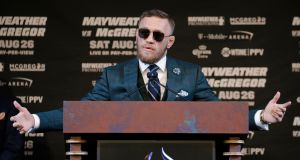 How can I watch the fight?

The event will be broadcast on Sky Sports Box Office at a cost of €24.95 for McGregor’s Republic of Ireland compatriots. If that sounds steep, then it is worth remembering that punters across the pond will have to fork out $89.99 for standard definition and $99.99 in HD to watch the light-middleweight contest on Showtime.

What time will it start?

It is difficult to say for certain, but it would be worth going to bed and setting an alarm rather than trying to stay awake if Mayweather-McGregor is the only bout that appeals as the main event will not start before 4am. A reasonable guess would be around 5am — but it may even be 5.30am when the first bell sounds.

Who else is on the bill?

Wales’ Nathan Cleverly defends his WBA world light-heavyweight title against Badou Jack, a fighter promoted by Mayweather who defeated George Groves and drew with James DeGale in his run as WBC super-middleweight champion. Elsewhere, Mayweather protege Gervonta Davis makes the second defence of his IBF super-featherweight title against Francisco Fonseca, while Middlesbrough’s Savannah Marshall, who has competed at the past two Olympics, makes her professional debut in the super-middleweight division against Sydney LeBlanc.

How many rounds is it?

In both sports, there is a rest period of one minute between rounds.

What are the differences between boxing and UFC?

1. The nature of the fight: Boxers are officially only allowed to attack their opponents through punching, and even excessive clenching is discouraged and monitored by the referee. If a boxer is knocked down, his opponent is not allowed to resume attacking him until he has returned to his feet and has the referee’s permission to do so.

In UFC, fighters can box, grapple, wrestle, kick-box, and continue to strike their opponent while they have been knocked down.

2. The size and shape of the ring: A boxing ring, within the rules of the British Boxing Board of Control, should have four ropes and be between 16-20 square feet.

A UFC ‘octagon’ is 30 feet across and six feet high, surrounded by a fence.

3. Cuts men: Boxers regularly provide their own cuts man, and one of their choosing. The UFC, however, provide one for each corner, and that same cuts man works the same corner for every fight of each event.

4. Weights: Boxing has more weight divisions than the UFC, and though many of those divisions share names, their weights vary.

5. Sponsorship: Unlike in boxing, UFC fighters are forbidden by their contracts to pursue their own sponsorship deals. They presently have an overall sponsorship in place with Reebok.

6. Weigh-ins: In boxing, a fighter must weigh in at the scheduled time and if he or she is overweight, has an hour to return and achieve the correct weight. If they remain overweight after an hour they do not receive a further chance, though the fight may still proceed.

In the UFC, on the day before a fight, a fighter has a window of four hours in which they can make weight at their own convenience.

7. Gloves: A boxing glove covers the entire hand, and in fights between the flyweight and welterweight divisions, 8oz gloves are generally worn.

In the UFC, a fighter’s fingers remain exposed, and the glove generally weighs between 4oz and 6oz.

Panorama show Mo Farah changed account to anti-doping investigators 14:41
Jack Conan returns to full training ahead of schedule 14:24
Irish Olympic hopefuls fly back from Italy amid coronavirus outbreak 14:12
All in the Game: how Firmino’s agent made him faster . . . on his laptop 14:00
Questions raised over Ireland v Italy fixture due to coronavirus 13:53
Here is your handy guide to sport on television this week