Conor McGregor: The poster child of an on-demand generation

Like Christy Ring, Roy Keane and Brian O’Driscoll before him, he captures imagination

UFC lightweight champion Conor McGregor is due to face Floyd Mayweather, who retied in 2015 with an unblemished 49-0, in a 12-round super welterweight boxing bout on August 26 in Las Vegas. Video: Showtime 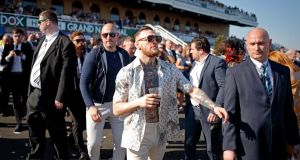 When he lived in digs above The Fountain café on Cork’s Grand Parade, Christy Ring used to walk the short distance to St Augustine’s church each morning for 7.30am mass. He gifted his eighth All-Ireland medal to the priests there and it was used to decorate a chalice. A daily communicant and a member of the Catholic Young Men’s Society in his native Cloyne; on the biggest days of his sporting life he genuflected and kissed the ring of some bishop or prelate in the middle of Croke Park. Nobody flinched at the bizarre spectacle. That was just the way things were.

Once upon a time in New York city, some enterprising businessman made Ring an offer. They wanted to open a bar with his name over the door. In return for use of the brand, half of all profits would be his. He turned them down, just like he eschewed a variety of other lucrative commercial opportunities to cash in on his fame, preferring to earn his corn driving an oil truck for Shell, a company that famously tried to stop him travelling to the States on a hurling tour because it clashed with his delivery schedule.

In the forties and the fifties, Ring was the greatest sportsman in the country and he was of that particular Ireland. Devout. Tee-total. Humble. Pious. A sepia-tinted hero when the world existed only in black and white.

Half a century after Ring first bestrode hurling, Roy Keane tooled around the corporation housing estates of Cork’s northside in a flaming red Mercedes with the number plate Roy 1. Gaudy. Crass. Juvenile. But, it wasn’t unknown in those days for emigrants to return for their summer holidays with a hired Beamer to exaggerate how well things were going over in England. He was of that time and place, from a house scarred by unemployment, honed by the hardship of the 70s and 80s, and aspirational enough to want to flaunt new-found wealth in the first flush of professional success.

Even if his bout of conspicuous consumption was a preview of the way so many of his compatriots would behave in the Celtic Tiger decade coming down the line, Keane got rid of the car soon enough. He had to. Unwittingly and unwillingly, he became the first superstar of Ireland’s tabloid age. In 1996, a year before David Beckham was introduced to Posh Spice, paparazzi staked out Keane’s family home in Mayfield as we entered an age so prurient and intrusive that we ended up on first name terms with his dog. He was the bridge between the old and new Ireland. In one, people prayed on Sundays, in the other, they shopped.

The sporting heroes of any era offer us a window into the values and norms of that society. Those we look up to and how we idolise them provides a snapshot of what we were at a particular time. From Danno Mahoney’s wrestling exploits in America (ersatz as they may have been) enthralling people back home struggling through the 1930s, to Brian O’Driscoll embodying the supreme self-confidence of the affluent 2000s, we can always find an athlete whose career can help us frame the broader social history of any epoch.

Some people today are as uncomfortable with Katie Taylor’s occasional expressions of her religious beliefs as their forefathers were once as unquestioning about the presence of a man of the cloth at the throw-in of major hurling matches. Many men of a certain age have spent the past few years tut-tutting about every fresh Conor McGregor outrage the same way their own fathers and grandfathers used to complain about the antics, the clothes and the hair of George Best. Time passes, and offence is in the eye of the beholder.

What we can all agree on is that McGregor explains 21st century Ireland like nobody else. As with Ring, Keane, O’Driscoll et al, he too, for better and for worse, is a product of his own time and place. The poster child of an on-demand generation weaned on Sky Sports, raised to believe marketing hype about instant classics, Super Sundays and routine title defences that are fights for the ages. Through no fault of their own, their first language is hyperbole, their default setting exaggeration.

When UFC came along, speaking fluent Sky and offering them shorter, snappier contests better suited to their dwindling, highlight reel attention spans, they found a sport uniquely tailored to their cravings. As kids, their parents laughed as the bearded Giant Haystacks and the bulbous Big Daddy pantomimed around the ring on Saturday afternoons. In contrast, these millennials gorged themselves more frequently on the redder, steroid-enhanced meat of the WWE, and came to see preening self-regard as something to emulate rather than a very obvious commercial schtick. They took John Cena as their role model. Their dads looked up to John Giles. Therein lies a crucial difference.

As soon as they were old enough, these lads were going to the gym with the same devotion Ring’s generation traipsed to mass in shirts and ties. Not as a dietary push or part of a team exercise either. They pumped iron in pursuit of a physical aesthetic of swollen pecs and pneumatic biceps, their meticulously manscaped bodies adorned by tattoos that shape-shift when they flex their Popeye arms in front of the mirror. In McGregor they see themselves and they love what they see. Irreverent and irascible, dismissing history and everyone that came before him the same way they’ve learned that the banks and the church and the politicians ruined their own great country.

And their man can’t be racist because he listens to rap music. Just like them. He’s not an insufferable braggart either because he’s just doing what they do on a larger scale, using social media to showcase the most glamorous and exciting moments in their lives. To these chronic oversharers, modesty is just the name of a stripper they met the first time they blew a couple of grand they didn’t have going to Vegas to see McGregor fight Dustin Poirier.

When Steve Collins peddled arrogance and braggadocio in the mid-90s, the Irish public found it boorish and dismissed him as a blowhard. They liked heroes of a more humble stripe, Keane, Denis Irwin, Paul McGrath, characters who let their immense achievements in the arena speak for themselves and kept their bank balances private. Now, devotees justify each cringe-inducing McGregor atrocity by the fact it’s making him richer than any of the greats of yesteryear. The price of everything. The value of nothing. Little chance any of his belts or baubles ending up in a sacristy near you.

“No man can adequately describe Irish life who ignores the Gaelic Athletic Association,” wrote the poet Patrick Kavanagh one time.

No man will ever adequately understand modern Ireland who ignores Conor McGregor.