Is the McGregor and Mayweather fight safe? Doctors say no 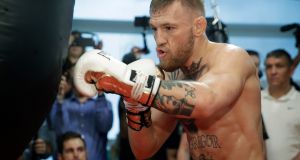 Conor McGregor trains during a media workout in Las Vegas ahead of his bout with Floyd Mayweather. Photo: John Locher/AP

The highly anticipated showdown between Floyd Mayweather Jr and Conor McGregor may be a financial bonanza for its promoters, as well as for Nevada’s casinos and sports books, but there is an important constituency that does not believe Saturday’s bout should happen at all: the Association of Ringside Physicians.

The group of more than 100 ringside doctors, whose members have decades of experience and have worked hundreds of major bouts in New York, Nevada and other jurisdictions, is arguing that McGregor, the mixed martial arts champion who will be fighting in his first professional boxing bout, is overmatched by Mayweather, who is 49-0 and considered the best boxer of his generation.

“We were very surprised this bout was even sanctioned and was going to be permitted to carry on,” said Larry Lovelace, a doctor and the president of the organization, which is focused on preserving fighter safety. “The thing I really fear, truly fear, is that somebody’s going to get really hurt in this upcoming fight.”

The Nevada State Athletic Commission is responsible for deciding what constitutes a fair fight, and for sanctioning bouts that are often worth hundreds of millions of dollars. In 2015, for example, the commission deemed a fighter named Rohan Murdock a vastly inferior opponent for the boxer Andre Ward and refused to sanction their light heavyweight bout. On paper at least, Murdock appeared to be a credible opponent: He was 18-1 and the World Boxing Organization’s No6-ranked supermiddleweight.

“You can’t just go by the numbers, that he’s 18-1, you have to look at who he’s fought,” said Bob Bennett, the executive director of the commission. “I have the utmost respect for any fighter that’s willing to get in the ring. But Andre’s skills were far superior to Murdock’s.”

While McGregor, 29, compiled a 21-3 record in mixed martial arts, in which the rules allow him to use his feet and wrestle opponents to the ground, Bennett said the commission decided that he was simply a premier athlete who belonged in the ring with Mayweather.

“If you’re going to take the position that Conor has never had an amateur or professional fight, then I’m not going to change your mind,” Bennett said. “If you look at him today versus Floyd Mayweather, Conor is the taller, longer, stronger, more powerful opponent. He’s also a southpaw, which makes it a little more difficult for a conventional fighter. He’s 12 years younger than Floyd.”

Richard Steele, a retired Hall of Fame referee who officiated many of boxing’s biggest fights over a career that lasted nearly four decades, said he was not sure he would have sanctioned the bout.

“Here’s a guy from one sport, challenging the world’s best in his own sport — I really don’t know how it’s going to work,” Steele said. Referring to McGregor, he added: “He can’t kick. He can’t elbow. He can’t do nothing. Nothing that he’s used to doing that makes him a great MMA fighter.”

Steele said he would be inclined to stop the fight more quickly than he normally would if McGregor appeared to be in trouble, considering McGregor’s lack of boxing experience.

“I would definitely have it in mind about protecting this kid,” Steele said. He added: “The safety of the fighter is always going to be there. But it might be a little bit more in this fight because this guy’s never been in a boxing ring before.”

Erik Magraken, a lawyer who publishes the blog Combat Sports Law, questioned whether Nevada regulators were able to put fighters’ safety first when they profited from the events themselves.

“Commissions exist in an inherent conflict of interest,” Magraken said. “They are designed to look after the health and safety of fighters, but they rely on keeping a percentage of gate receipts. They ultimately have a financial stake in bouts.”

The Nevada commission has a particularly large financial stake in the Mayweather-McGregor bout. The state receives eight per cent of the gross revenue from every ticket sold at a boxing event in Nevada, and the commission gets 25 per cent of that amount.

Leonard Ellerbe, the chief executive of Mayweather Promotions, and Dana White, the president of the Ultimate Fighting Championship, have told reporters that over $60 million in tickets have been sold for the fight, which means Nevada stands to receive in excess of $4.8 million, with the athletic commission’s cut topping $1.2 million.

Lovelace said the commission’s decision to approve lighter gloves for the fight was also made with an eye toward the bottom line.

McGregor and Mayweather will wear eight-ounce gloves for their middleweight bout instead of the 10-ounce gloves typically mandated for fighters in the 154-pound weight class. In granting this request, which had been made jointly by the fighters, the commission ignored a plea from the Association of Ringside Physicians. In theory, the lighter gloves will make for more powerful punches, especially for McGregor.

Bennett denied that the commission was putting its finances ahead of fighter safety.

“As a regulator, I take offense to the fact that we’re approving this fight for fiduciary reasons,” Bennett said. “That’s totally unfair, and it’s simply not true.”

1 No Masters, so Tiger Woods battles son Charlie for green jacket
2 Stephen Kenny: ‘I want people to come and look forward to watching this team’
3 My favourite sporting moment: Roscommon minors restore pride to a county
4 Germany well ahead of the curve as Bundesliga gears up for return to action
5 America at Large: Hurling fan Dowling leading the fight against Covid-19
Real news has value SUBSCRIBE