Take a look at the vital stats behind Floyd Mayweather and Conor McGregor as they prepare to face off in Las Vegas. Video: David Dunne 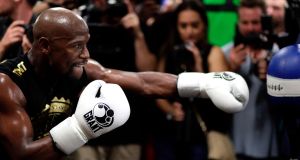 Say what you like about undefeated boxing legend Floyd Mayweather and mixed martial arts star Conor McGregor’s upcoming contest (“boring” and a “farce” are two of the kinder previews) but the so-called “Money Fight” looks set to be one of the most lucrative in history.

Tickets, TV sales, sponsorships and betting could generate close to $600m in sales, according to experts, when the two meet on Saturday night. The fight may not go down in history as a classic but it is poised to be the richest since Mayweather took on Manny Pacquiao in 2015, a fight that generated $623m in overall revenue.

There have been reports that ticket sales for the fight have been slower than expected. Tickets were sold out in less than a minute before Mayweather-Pacquiao’s fight (despite a botched rollout due to an impasse between the promoters) and the cheapest was $4,000, more than double current prices for Mayweather-McGregor. Tickets on the secondary markets are selling at a steep discount.

The fight will be held at the T-Mobile Arena in Las Vegas, which lists a capacity of 20,000 for boxing. Mayweather-Pacquiao’s 2015 fight generated a record $72.2m from the sale of 16,219 tickets at the smaller MGM Grand Garden Arena.

Patrick Ryan of Eventellect, a ticket management firm, expects Mayweather-McGregor to generate around $70m in ticket sales but said that he wouldn’t be surprised if the fight does generate more than Mayweather-Pacquiao. “They can’t sell as many $10,000 seats but there are more at a lower level. This is an exhibition not a title fight, people don’t pay premium prices for an exhibition,” he said.

That said Ryan believes there will be no empty seats come fight night. Casinos will comp tickets to high rollers and the excitement the fight is generating means it will be a capacity crowd.

UFC president Dana White believes the fight will be the most lucrative pay-per-view of all time, surpassing the record-shattering figures of Mayweather-Pacquiao. “We’re gonna do the numbers that everyone has been talking that we’re going to do,” White said recently. “Everything is tracking right now to say that we’re going to kill this thing. So it’s looking really good. “It is the most distributed event in pay-per-view history, in over 200 countries on pay-per-view. This fight will reach over a billion homes worldwide.”

White, who was instrumental in making this fight happen, would say that but other PPV sellers agree. Tim McManus, director of marketing for Joe Hand Promotions, one of the US’s largest sellers of pay-per-view special events to commercial clients such as bars and restaurants, said the company had never experienced anything like it. “We started selling this at the end of July and we are still getting 1,000 calls a day. We have people working 12-hour shifts to keep up,” he said.

He predicts it will be the biggest PPV event the company, which was founded in the 1970s, has ever handled. “My mum has asked me questions about this fight. It has crossed over into the mainstream in a way few fights have,” he said.

Mayweather-Pacquiao attracted 4.6m PPV at an average price of $99, that equaled $455m. White is expecting around 4.9m buys for Mayweather-McGregor which would be $485m at $99 a pop.

Both Mayweather and McGregor like their bling – and their bling likes them. Mayweather even turned his love of Swiss watchmaker Hublot into a taunt during one of the fighters’ press conferences. “You’re a microwave meal with a cheap-ass watch on —–step your game up,” said Mayweather, pointing to his Hublot Big Bang watch, jeering: “$1.4 million, bitch!”

Getting Hublot’s name on Mayweather’s shorts will reportedly cost the company $3.5m and the fighter will make millions more from splashing brands on other areas of his shorts, his cape, boots and even the pillow where he will rest his head between bouts.

Until recently McGregor had a lucrative, but limiting, sponsorship deal with Reebok. For this fight he is a free agent and, given the hype for this fight, sponsors are clamoring for a piece of the action. The Irishman also recently signed a deal with Beats By Dre, Monster Energy and Rolls-Royce, which gave him a custom-made car last year.

On the eve of the fight, official sponsorship deals were still in the works, which left little time for activations. But ESPN reckons the pair could walk away with $22m in sponsorship. Enough to keep both of them in diamond-encrusted Hublots.

Bookies could be the biggest losers on Saturday if – and it’s a big if – McGregor pulls off an upset. Jay Rood, vice president of MGM Resorts race and sports, reckons the fight could attract $50m in bets in Nevada – and nearly all that money so far is on McGregor. Rood and the rest of the industry are betting on a Mayweather win. “And not for the first time,” he said.

Bets for McGregor are currently pouring in at 20 times the numbers of bets on McGregor. At current odds, $20 on the MMA star would return $65 plus your stake back. The same money on a Mayweather win would return just $4 on top of the stake. “You have got to go with the historical data,” said Rood. “But anything can happen.”