Ian O'Riordan at the Emirates Arena 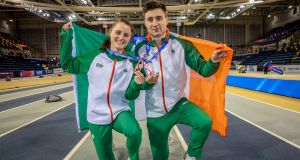 They’ve likened it to the killing zone, the last strides of championship running causing such a state of oxygen deprivation it can feel like a case of the bends. Only when Mark English and Ciara Mageean resurfaced for air they’d won both themselves European Indoor medals.

In doing so they made it a sort of double Scotch bronze for Ireland, in both cases also a sort of redemption run. Mageean won bronze over 1,500 metres after a properly frantic finish, only passed for silver in the closing strides when the super-fast finishing Sofia Ennaoui from Poland came back her to snatch second.

By then victory had gone to local favourite Laura Muir, who dictated the race throughout and won from the front in 4:05.92. It was Mageean who led the chase when it counted, surging into second as the bell lap approached, already it seemed safe of a medal. After finishing fourth at the European outdoors in Berlin last August, Muir and Ennaoui also ahead of her on that occasion, Mageean was still well pleased with bronze.

Likewise with English – who found himself swimming in a sea of lactic, holding on, hanging in, digging deep, to win bronze over 800m. Four years ago he won silver, but like Mageean, English has endured his share of low points since, this performance meaning he’s now won a medal in every championship final he’s run.

For Mageean there was also added justification in her move to Manchester in late 2017, after a below-par run at that summer’s World Championships in London. “Delighted, absolutely, I came into these championships to win a medal, and happy to that bronze, while a part of me is also bit annoyed that it’s not silver,” said Mageean, who has endured plenty of other lows since winning outdoor bronze back in Amsterdam in 2016 – dropping out of this final two years ago in Belgrade.

“But that’s the athlete and competitor in me, but if anyone said to me a few months back you can take any medal, I’d have said yeah, I’ll have that. But I knew was in good shape, knew I was training well, in form, so be able to deliver that out on the track means an awful lot. And I just wanted to walk off the track with my head held high. I’ve beat myself up before, after I’ve finished, but I go out to enjoy my athletics now as well.”

Having run so confidently to get into second, coming round the final bend Ennaoui found a little more in reserve to come again, taking silver in 4:09.30 to Mageean’s 4:09.43. Still it was a brilliant effort by the 26-year-old Down woman: “We’re athletes, not robots, but to be able to prove the work I’ve been in as well, delighted to see the Irish flag raised. I live to run in that green, white and gold, People talk about different things in athletics, but I don’t do it for the money, and the amazing times are very few and far in between.”

Exactly 70 minutes earlier, she’d watched English win his bronze medal, while warming up: “Of course that inspires you, cheers you up, and you think ‘right, we’re going to have two medals going home now’, and takes that little bit of pressure off you guys as well, that you’re not pinning all your hopes on one athlete, as journalists sometimes like to say.”

Indeed English had gone into his 800m final looking to improve on the silver medal won in Prague four years ago, this seven-man final also giving him a little extra incentive to make the most of it. Another English medal, for the Irish, on Scottish ground – surely written in there somewhere.

Victory went to Alvaro de Arriba, one of the Spanish duo and a big kicker in 1:46.83, with Britain’s Jamie Webb taking silver in a best of 1:47.13. English was always intent on getting himself into that medal spot - never drifting outside the top three, finishing a close third in 1:47.39. The other Spaniard Mariano Garcia was fourth 1:47.58.

“Felt amazing out there, I really went for it, got on the shoulder of the leader the whole race,” he said. “It was tough trying to stay there, but I managed to hold on in the end, and come away with a medal.

“I rang Steve Magness my coach, just before the race, and he told me to sacrifice that bit of energy at the start, to get out, and I’ve got him to thank for that. I didn’t think I’d hold on to the medal at that point, to be honest, but no one had the speed to come by me. So really happy. It’s nice to come back after four years, and that’s just the nature of this game, you’ve got to stick at it. You’re not going to win something every year, and I think that’s the lesson for any athlete coming through, just to stick at it, there’ll probably be more tough times than good times. But it’s worth it when you get the good times.”