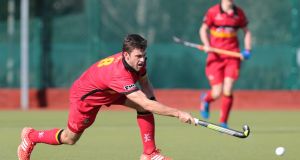 After an afternoon of frantic Twitter checks at Havelock Park and Grange Road, Banbridge finally took the laurels in the men’s EY Hockey League on goal difference from Three Rock Rovers.

With six goals in the tank, Banbridge may have felt any sort of win over Railway Union would have sufficed but when news that Rovers were leading 3-0 against Instonians after just eight minutes surfaced, it quickly became clear Banbridge would need to run up a big score of their own.

By half-time, a Fraser Mills double and a penalty stroke from Matthew Bell had the Co Down side 3-0 up, only to hear their advantage had been halved with Rovers six to the good.

The Dubliners then went 8-0 up with a head of steam building while Mark English’s goal for Railway meant the gap was down to two goals in the overall scheme of things – Banbridge leading 5-1 at the three-quarter break.

But Rovers’ momentum stalled terminally in the closing quarter as Instonian’s William Robinson gained himself some cult status in Co Down with a consolation goal that put Banbridge firmly in the box-seat with six minutes remaining.

They closed out a 6-1 win with Ross Beattie adding the last goal, while Rovers ended 9-1 against Instonians, three short of what they required.

In addition to the league title – coming on the back of their Irish Senior Cup success – the win assures that Banbridge will return to the Euro Hockey League for 2017/18 and top seeding for next weekend’s Champions Trophy playoffs.

There they will meet Monkstown, who rubber-stamped their ticket with a 4-3 win over Lisnagarvey. Rovers will play Garvey in their semi-final, looking to extend their run of 11 league wins in succession.

Annadale, meanwhile, will join the national league after a year’s absence. They beat Cookstown 3-1 in their provincial playoff final with Peter Caruth the inspiration for a young side for whom Fergus Gibson, Craig Getty and Oli Brown were on the mark.

Cookstown meet UCD next week in a final playoff for the last place in next season’s top tier.