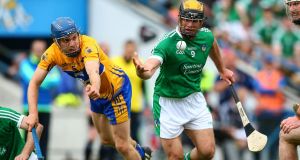 James Ryan: “I was absolutely thrilled for the players and management but, on a personal level, I’d be lying if I said it wasn’t hard. Your lifetime dream was always to do what the lads had just achieved. Photograph: Cathal Noonan/Inpho

The landscape in Kilteely-Dromkeen is different from the rest of Limerick because it is situated in one of the most important carboniferous volcanic districts in Ireland and England.

Two volcanic phases about 300 million years ago pushed up the conical volcanic plugs of Knockderk and Kilteely Hill, while over the road, hardened lavas formed a cliff of basalt hexagons – similar to those found at the Giant’s Causeway – on the Hill of Nicker.

History and geology still has a limited impact in the hurling carpet-lands of the Golden Vale. Tractors and farm-trailers dominate the traffic on the backroads but, as in most rural parishes in July, the real pulse can be taken at the GAA field. It’s Cúl Camp week and the 52 kids James Ryan has on the Kilteely-Dromkeen pitch are buzzing with the kinetic energy and anticipation of an impending All-Ireland semi-final.

In Limerick last year, their Cúl Camp attendance figures were their highest ever but the numbers have increased again this summer.

“It’s phenomenal what an All-Ireland win can do for a county,” says Ryan, a Limerick Gaelic games administrator.

“That Kilkenny culture of young lads and girls out hurling everywhere is starting to come into Limerick now.”

The excitement levels at the camp will go to another level when one of the Limerick players – Aaron Gillane, Paddy O’Loughlin, David Reidy or Gearóid Hegarty – arrives as a visitor later in the week. As a former player, Ryan knows what to say and what not to ask players on weeks like this, but he is still far more comfortable meeting his former team-mates now than he was last season.

“Any player you talk to, the first year of retirement is always the hardest,” he says. “You still emotionally feel part of it but I’m finding it a lot easier to distance myself from it this year. Nothing is familiar anymore. There are new players involved now that I don’t even know.”

Ryan only walked away at the end of 2017. He was team captain that season. When he met manager John Kiely in Tipperary Town for a chat that October, Kiely wanted him to return.

“I just had enough of the training,” he says. “I was mentally burnt out but the legs weren’t working as well as they were either. My body was recharging but my mind had just given up. I’d had enough.”

Ryan had been on the carousel for 12 years by then, part of which had been a dual spin. After playing in the 2005 All-Ireland minor hurling final, Ryan began his senior career with the Limerick footballers in 2006 and 2007, before becoming a dual player in 2008, and then committing solely to the hurlers in 2009.

When all hell broke loose a year later and the hurlers went on strike, Ryan absented d himself from the mess by returning to the footballers.

He scored two points in a narrow Munster final defeat to Kerry but Ryan left that dream behind afterwards and began re-chasing a new one with the hurlers. Ryan was an enforcer, a throw-back to the hardened Limerick team of the 1990s, but he provided the perfect balance between steel and silk and was a constant presence on the team until the shadows started closing in on his career.

Although he was captain in 2017, he was dropped for his last game, against Kilkenny that July.

“I was disappointed,” he says. “But probably the most disappointing aspect was that we lost and I never got the opportunity to improve my game and get it back to where it needed to be to reclaim my starting place that year.”

Ryan just silently accepted what his heart and head were telling him afterwards. Studies have shown that an athlete’s coping mechanisms regarding retirement are directly influenced on choice. Making that choice himself made acceptance far easier for Ryan but watching Limerick go on and win an All-Ireland was bound to trigger regrets over his decision.

“So much stuff goes through your head,” he says. “From having captained the lads, knowing them so well, and then working for Limerick GAA, you can’t describe how happy you are for the lads, and for the whole county.

“I was absolutely thrilled for the players and management but, on a personal level, I’d be lying if I said it wasn’t hard. Your lifetime dream was always to do what the lads had just achieved, and it just slipped out of your hands. You go through a lot of self-doubt. You ask hard questions. ‘Was I holding this team back? Could I have done more?’

“It’s a tough thing to take. From an individual point of view, and being a small bit selfish, it’s absolutely heartbreaking. I’d give anything to have an All-Ireland medal. I’d love to have been part of the whole celebrations.

“You go through a complete emotional rollercoaster but you have to stick by your decisions in life. When you’re willing to retire voluntarily, you have to accept that this could happen. It can be cruel but that’s just sport. There is always someone there to take your place.”

Ryan is at peace with his decision now. Life moves on, time always shapes perspective. Ryan has taken up darts. He does 5ks with Galbally Running club. He takes himself off sea-fishing when the chance presents itself. And he’s busier than ever tilling the GAA ground in Limerick for future generations.