Mads Pedersen surges through the rain to world title 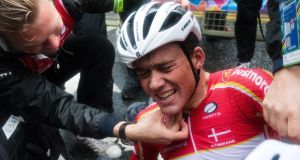 Danish rider Mads Pedersen stunned the world of cycling when he won the Elite road race championships in Harrogate, Yorkshire, on Sunday. The 23-year-old started the race as an outsider but on a day of soaking wet and cold conditions, the Scandinavian coped best with the adverse weather and was strongest at the end.

Pedersen responded to an attack by the Swiss rider Stefan Kung with five laps remaining of the finishing circuit. They were joined by Italian duo Gianni Moscon and Matteo Trentin, plus Mathieu van der Poel (Netherlands). The latter was tipped for success but cracked in the finale and was dropped; Moscon also slipped backwards, leaving the other three to sprint for the line.

Trentin was fancied by many to win but Pedersen had the most left in the tank and outsprinted the Italian and Kung. Triple world champion Peter Sagan (Slovakia) put in a chase but left it too late; he finished fifth, 43 seconds back. Ireland’s six-man team had hoped to challenge but each of them suffered in the conditions and abandoned the race.

“I think it is every rider’s dream to wear that jersey and for me to do that now is unbelievable,” said Pedersen, who will be now entitled to wear the distinctive rainbow jersey of world champion for the next year.

“The plan was to get me out [front] in the early final and then let [teammates Michael] Valgren and [Jakob] Fuglsang come from behind. But in the end they didn’t follow Van der Poel and Trentin when they came from behind to my group. Then from then on it was just survive, survive, survive and then hope for best in the sprint.”

Trentin has a better record in big races but couldn’t match his rival. “I just hoped that when I saw the finish line all the pain would be gone and I could do a good sprint,” Pedersen explained.

Ireland’s Sam Bennett was picked by many to be a dark horse for the medals, and was backed up by the other Irish on the team, namely Dan Martin, Eddie Dunbar, Conor Dunne, Rory Townsend and Ryan Mullen.

However Bennett was adversely affected by the weather and ran out of steam, withdrawing long before the finish. He has nevertheless had a superb season, winning 13 races, including two stages in the recent Vuelta a España.