The South African was addicted to crystal meth, but an Irishman helped save his career 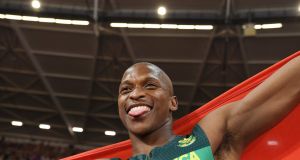 South Africa’s Luvo Manyonga celebrates his gold medal win after the final of the men’s long jump at the 2017 IAAF World Championships in London on Saturday. Photograph: Kirill Kudryavtsev/AFP/Getty Images

Here comes the story of Luvo Manyonga – because somehow, lost behind the comic-strip hero and villain in London these past few days, is the true story of drug use and sporting redemption and the Irishman who played a strong hand in it.

“It’s not what happens but how you respond,” said John McGrath in a tweet, posted not long after Manyonga won the men’s long jump inside the Olympic Stadium on Saturday night – around the same time the crowd were booing Justin Gatlin’s 100m victory over Usain Bolt.

Manyonga, we all know, once used drugs. Only, unlike Gatlin, his wasn’t the performance-enhancing sort, but the deadly addictive “tik”, the local variant of crystal methamphetamine widely abused in the townships around Mbekweni, close to the city of Paarl in the Western Cape of South Africa.

Now his unimaginable journey from those meth dens to the top of the world medal podium is complete.

Five years ago, Manyonga reckoned he was about “5 per cent away” from death, such was his addiction to tik and the downward spiralling of his once-promising athletic career. He was World Junior long jump champion in 2010, finished a brilliant fifth at the 2011 World Championships in Daegu, still only 20, but once back Mbekweni promptly blew all his winnings on his own drug use and that of those around him.

In 2012, instead of contesting the London Olympics, he was serving an 18-month ban after testing positive for crystal methamphetamine, one of several recreational drugs also on the banned list even though they are anything but performance-enhancing.

It was a year after that – forsaken by the South African athletics federation – when McGrath found out about Manyonga’s story. “Or he found me,” McGrath has said, recalling his involvement at a time when few people wanted anything to do with Manyonga. “The first thing Luvo needed was a friend and then someone to believe and share in his dreams.”

Now aged 50, McGrath moved to South Africa towards the end of 2009, first to Cape Town, then to Paarl, after a journey in itself equally unimaginable. Born and raised in Waterford, he’s served his time as a bin man, road cleaner, international rower, martial arts expert, circus strong man, strength and conditioning coach and motivational speaker, and now runs a gym in Paarl.

Luvo went into a downward spiral. He was staring death in the face

At first, McGrath got Manyonga back in touch with his original coach, Mario Smith; but in June 2014, on his way to meet Manyonga at training, Smith was involved in a horrendous car crash, and died from his wounds.

For a while Manyonga went worryingly astray again, before an August 2014 interview with McGrath and Manyonga with the South African newspaper, the Mail & Guardian, headlined “The impossibility of loving Luvo” and written by journalist Luke Alfred, convinced the South African athletics federation to give him one more go.

“The loss of Mario was a terrible blow,” McGrath said in the interview. “Luvo went into a downward spiral. He was staring death in the face. It would not be an exaggeration to say then that the amount of people who believed in Luvo could be counted on one hand.

“There are only two ways Luvo can go: he’ll either be standing on an Olympic podium, or he’ll be dead from an overdose by the time he’s 30.”

Again, as unimaginable as it still seems, Manyonga was standing on the Olympic medal podium just two years later, winning the silver medal in Rio last summer, and only denied gold after the American Jeff Henderson out-leaped him by 1cm with his last jump, 8.38m to Manyonga’s 8.37m.

Earlier this year, Manyonga came out and improved his best to 8.65m – and is now closing in fast on Mike Powell’s world record of 8.95m, set back in 1991, the year he was born.

“I have been praying to get this,” said Manyonga afterwards, as well he might. His next target is that world record, perhaps even the first ever human leap of over nine metres. Once upon a time unimaginable, of course.