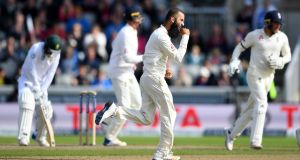 Recent South Africa tours have seen off England captains with a disturbing frequency but on a sunlit Old Trafford evening Joe Root, new to the job, could raise the Basil D’Oliveira trophy in the knowledge he had passed his first examination with flying colours.

The series against South Africa had been won 3-1 after England bowled the tourists out for 202 to ensure victory in the final Test by 177 runs. Root had established he was the best batsman on both sides, his output unencumbered by the captaincy; he had handled his team deftly on and off the field. He has looked comfortable in the job. He is now the man in charge. Bring on – no, let us not get ahead of ourselves – West Indies.

The shortcomings of this England side are obvious and will occupy the minds of the selectors over the next few days before a crucial meeting to decide the team for the first Test against West Indies on Thursday week. But crucially over the last six weeks Root has been able to maximise the skills of the established players, who have been the architects of victory over South Africa. In particular this applies to Moeen Ali and Jimmy Anderson, who have shared 45 wickets in this series.

On Monday this was most obvious in the way Root handled Moeen, who has been a revelation as a bowler since the drubbing he took in India last winter. With Faf du Plessis and Hashim Amla cruising along Moeen was offering little threat. Both batsmen kept dragging his off-breaks to the leg side with the breeze, no matter where the ball was pitched. There did not seem a line for Moeen to bowl.

Soon Root switched his off-spinner to the James Anderson End. This was where all the pacemen wanted to bowl and that had been the case throughout the match when England were in the field. But Root now changed that pattern, recognising that priorities were different on a fourth day pitch. This excellent surface was sleeping for the seamers when operating with an old ball. It was time to give his off-spinner all the assistance available; unusually it was the spinner who should have the best end. That switch paid dividends rapidly in a startling passage of play.

No longer was it so easy for the right-handers to shovel the ball on the leg-side as Moeen enjoyed a little drift that was encouraged by the breeze. Soon Hashim Amla was plumb lbw on the back foot, not for the first time in this series against a spinner, even though England had to ask for a review to gain that decision.

If the removal of Amla was critical; the dismissal of De Kock soon after was universally uplifting. Seldom have the two most phlegmatic English cricketers been so animated. De Kock drove against Moeen and edged; the ball flew rapidly to the off-side where Cook in the gully had stayed down as the manuals demand. England’s former captain, who was reckoned to be a bit of a liability in the field when he started in the team, stuck his hands in the right place and there the ball magically resided. It was a brilliant, instinctive catch, which had Moeen and Cook punching the air and the rest of the side in huddled exultation.

In the same over Ben Stokes pocketed another fine catch at slip to dispatch Theunis de Bruyn, the sort he practices assiduously each day with Trevor Bayliss. One imagines this was how Wally Hammond used to take them. Then, for good measure, Moeen was on hand to polish off the tail with consecutive deliveries and another nonchalant catch by Stokes. By now Anderson was more than happy to bowl at the wrong end, the one that does not belong to him, since he had snaffled two more victims, one of whom was a forlorn Faf du Plessis.

As usual in this series it all ended with bewildering speed. Earlier in the day with Moeen left stranded on 75 after the swift departures of Stuart Broad and Anderson to Morne Morkel it seemed as if England would have to work harder for their win, though there was little expectation that South Africa could knock off the 380 runs they needed to square the series.

Dean Elgar edged a beauty from Broad early on. Then Heino Kuhn, in what may well be his final Test, was caught at first slip by Cook off Anderson. Just before lunch Temba Bavuma feathered a delivery from Toby Roland-Jones and South Africa were 40 for three.

But after the break Amla and Du Plessis settled in, scoring at will. Suddenly batting was straightforward. It was now Root started juggling his bowlers until he hit upon the winning combination, which had Moeen given the privilege of the James Anderson End.

Thus England’s off-spinner ended up clutching the ball as a trophy and, rather sheepishly, waving it at the crowd having acquired his fourth five-wicket haul in Test cricket. Soon after he received the man of the match award.

So there were plenty of sources of celebration for the England camp. For once the selectors’ primary source of angst is not the spin department. With Moeen in this form the cupboard is not entirely bare, though an accomplice for him would be handy. However, there are holes to fill. The oddity is that England have won this series with something to spare, yet no one has any firm idea who should bat at No 2 and No 5 in the next Test. That is something for selectors, coaches and the captain, whose opinion gains in gravitas after this series, to ponder – tomorrow.