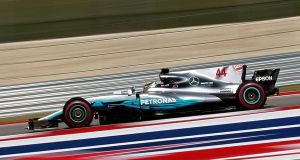 Lewis Hamilton in action during qualifying for the US Grand Prix at the Circuit of the Americas, in Austin, Texas. Photograph: Larry W Smith/EPA

Lewis Hamilton pulverised the track record to claim pole position on Saturday ahead of a US Grand Prix that could secure the Mercedes driver’s fourth Formula One world championship.

Ferrari’s Sebastian Vettel, the Briton’s closest rival but 59 points behind with four races remaining, qualified second with a prodigious effort just when it seemed Mercedes would sweep the front row.

Hamilton, chasing his fifth win in six years at the Circuit of the Americas in Austin, dominated every phase of qualifying and will be champion on Sunday if he scores 16 points more than the German.

“I love this track, it is such a fantastic track to drive,” he said. “It’s going to be a great race, a tough one, but I’m the best prepared I can be.”

Vettel is the only other driver to have won at the Texas track and will do everything he can to deny the Briton a 62nd victory but will also be haunted by two retirements in the last three races.

Hamilton’s pole, in a time of one minute 33.108 seconds on a gusty afternoon, was the 72nd of his career and 11th of the season.

It also allowed him to claim another of Michael Schumacher’s all-time Formula One records with an unprecedented 117th front row start.

While Mercedes look sure to clinch the constructors’ championship for the fourth year in a row on Sunday, with a 145-point advantage over Ferrari, Hamilton played down his own chances of wrapping things up in America.

“I think it’s highly unlikely that’s going to be the case,” the 32-year-old told the cheering crowd from the pit straight after parking up.

“Sebastian did a great job today to bring the Ferrari back up there. I think ultimately all I can do is do the best I can of my abilities and we are going to work as hard as I can to get maximum points.

“Sebastian is right there so unless he makes a silly mistake, which is unlikely as he’s a four-times world champion, then we are going to be seeing it [the battle] continue on to other races.”

Vettel’s time of 1:33.347 put him ahead of Hamilton’s team-mate Valtteri Bottas, who qualified third and shares the second row with Red Bull’s Australian Daniel Ricciardo.

“My lap was very poor in Q3 and I knew I had to deliver,” said the German, whose mechanics changed the car’s chassis after he complained about the handling in a fraught Friday practice.

“I got it right when it mattered at the end. It’s important to get the front row because I believe our race pace is really good.”

Spain’s Carlos Sainz, preparing for his first race for Renault after switching from Toro Rosso, will start seventh alongside compatriot Fernando Alonso in the McLaren.

New Zealander Brendon Hartley, making his Formula One debut at Toro Rosso, will be last on the grid after qualifying 18th but with a 25-place penalty for an engine change decided on before he arrived in the team.